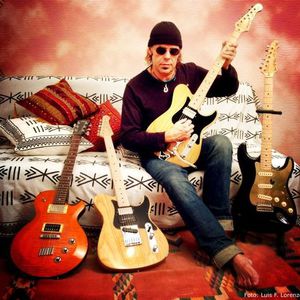 ?Javier Vargas was born in Madrid. When he was nine years old, he and his family moved to Argentina, where his parents had lived during the Spanish Civil War. They lived in Mendoza, San Luis, Buenos Aires and also in Mar del Plata, where he started playing the guitar with young musicians in places such as garages. He took guitar lessons, and he also used to go clubs to listen to groups playing blues live.

The first guitar Vargas had, present from his father, it was a Spanish guitar with naylon strings. When he got his first electrical guitar Javier had only 12 years. Led Zeppelin, Black Sabbath, Cream, Rolling Stones, The Doors, Jimi Hendrix etc. became famous and influenced by all this new and amazing music, Vargas decided to play guitar professionally. He was also inspired by the American Blues of B.B.King, Albert King, Freddy King, Albert Collins...

When his family moved to Venezuela in the 70s, Javier took his guitar and went to the U.S.A. to improve his knowledge of guitar by attending University. He lived in Nashville, Tennessee and in Los Angeles, where he played at clubs and also worked as a session guitar player. Every night he used to jam with American and English musicians. At these jams he met Alvin Lee, Roy Buchanan, Canned Heat and many others from whom he learnt a lot.

In 1972, while visiting his family in Spain, Vargas was employed as a guitarist for a cruise ship that was departing from Vigo (Spain) for Southampton (Great Britain) later crossing the Caribbean, with stops in Aruba, Jamaica, Curacao... There were many Jamaican musicians returning home and every night Jam Sessions took place on board. Beside being a great experience, the cruise also gave Vargas a taste of other musical influences such as Reggae.

In the 80s Vargas went back to Spain, where he played the guitar with successful Spanish musicians such as Miguel Rios and bands such as La Orquesta Mondragon. Also collaborated as a session guitar player and composer with many musicians and bands.

During the whole decade, Javier spent seasons in London - playing in clubs, Paris - working as musician of session - and New York-playing clubs of Jazz and Blues with his colleague the guitarist Ray Gomez.

After playing with several bands (RH +, Entrega Inmediata, Blues Express) at the end of the decade, Javier starts outlining his own project.

In 1991 Vargas went his own way, and formed the Vargas Blues Band.

All Around Blues, edited in 1991, was their first album. Collaborators included Elena Figueroa and Philip Guttman. The second LP, Madrid-Memphis, was edited in 1992 and included collaborations from blues musicians such as Carey Bell and Louisiana Red, the flamenco guitarist Rafael Riqueni, and singers Philip Guttman and Jeff Espinoza. Both albums enjoyed continued enthusiastic support from the Spanish music scene and reached the highest sales figure of any blues album to date in Spain.

Their fourth album Texas Tango, was produced by Jim Gaines in Austin, Texas and Memphis, Tenessee (USA). This album was released in various countries at the end of 1995, and includes collaborations with Double Trouble (Steve Ray Vaughan Band), Larry T. Thurston and Preston Shannon, among others.

In July 1996 Carlos Santana invited Vargas to play two songs with him at Santana's concert held at the Zenith, in Paris. The passion and feeling expressed by the guitar duo had the whole crowd on their feet. In 1998, Santana invited Vargas and this time with his Cuban singer David Montes, to play again at his concerts in Madrid and Paris (Bercy). This experience was repeated in Spain, when Vargas played as a guest of Carlos Santana on his opening tour of "Supernatural" in 2000.

In 1997 Vargas' fifth album Gypsy Boogie was released. The album was recorded in Madrid and Memphis, mixed in Florida and mastered in New York. Flamenco artists such as Raimundo Amador, Carles Benavent, La Chonchi and Cuban singer David Montes participated in the Madrid recording. At the Memphis sessions, blues-soul-rock artists such as Chester Thomson, Loonie Brooks, Larry McCray, Little Jimmy King, David Allen and Larry Graham all collaborated on the recording that once again was produced by Jim Gaines. Bassist Larry Graham introduced Javier to Prince and on the "Jam of the Year" tour in Spain, December 1998, Prince invited Vargas to Jam with him on stage in concert.

The sixth album, Feedback/Bluestrology (1998) was recorded at Hook End studios in Checkendom (England) and co-produced by Ian Taylor (Gary Moore, Cheap Trick etc. producer). This album includes collaborators from the Memphis sessions: Steve Potts, Dave Smith and Ernest Williamson and the singers Bobby Alexander and David Montes. Bluestrology was re-released as a solo album in January 2000.

The Vargas Blues Band's first USA live appearance took place in November 1999. There were two nights to remember at Buddy Guy's Legends Club in Chicago. The special guest artists were Larry McCray, Sugar Blue and flamenco singer Elena Andujar. A mobile recording unit under Ian Iaylor's supervision recorded the sessions. Javier Vargas was invited by Texas guitar hero, Chris Duarte to join him in concert, also at "Legends". This live album was completed in Madrid in December 99. The concert was filmed and recorded at a studio in the presence of a limited guest audience. At the session Vargas played together with guest artists such as flamenco singer Elena Andujar, flamenco guitarist Juan Gomez Chicuelo, Argentinean accordion player Jorge Lema, percussionist Gino Pavone and flamenco singer Marchena. This time Ian Taylor also directed the recording. Madrid-Chicago Live was released in May 2000.

The album includes five songs already recorded in other albums together with nine brand new songs.

In September 2004, Javier Vargas flew back to Memphis with a new project ready to be recorded. The chosen studio was Ardent, sound engineer John Hampton, and the A-Team of Tennessee musicians: Steve Potts on drums, David Smith playing bass, Earnest Williamson on keyboards, and the SRV's Double Trouble's Reese Wynans performing on keyboards and piano as the master he is.

Love, Union, Peace was release last March 2005. The album is all feeling, and includes 10 new songs, a powerful version of the previously recorded Magic of the Gods now performed by Devon Allman, and a delightful instrumental version of Burt Bacharach and Elvis Costello's God Give me Strength.

The huge diversity of their musical influences (Rock, Soul, Flamenco, Latin music...) and the power of their tunes fulfill all the requirements to charm all kinds of audiences??