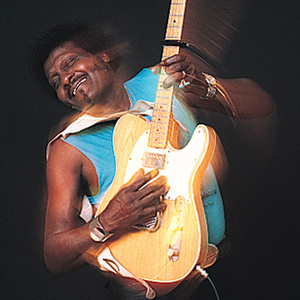 Albert Collins (October 1, 1932 ? November 24, 1993) was a blues guitarist, singer and musician. He had many nicknames, such as "The Ice Man", "The Master of the Telecaster" and "The Razor Blade". Born in Leona, Texas, Collins was a distant relative of Lightnin' Hopkins and grew up learning about music and playing guitar. His family moved to Houston, Texas when he was seven. Throughout the 1940s and 1950s, he absorbed the blues sounds and styles from Texas, Mississippi and Chicago. His style would soon envelop these sounds.

Born in Leona, Texas, Collins was a distant relative of Lightnin' Hopkins and grew up learning about music and playing guitar. His family moved to Houston, Texas when he was seven. Throughout the 1940s and 1950s, he absorbed the blues sounds and styles from Texas, Mississippi and Chicago. His style would soon envelop these sounds.

He formed his first band in 1952 and two years later was the headliner at several blues clubs in Houston. By the late 1950s Collins began using Fender Telecasters. He later chose a "maple-cap" 1966 Custom Fender Telecaster with a Gibson PAF humbucker in the neck position and a 100 watt RMS silverfaced 1970s Fender Quad Reverb combo as his main equipment, and developed a unique sound featuring minor tunings, sustained notes and an "attack" fingerstyle. He also frequently used a capo on his guitar, particularly on the 5th, 7th, and 9th frets. He primarily favored an "open F-minor" tuning (low to high: F-C-F-Ab-C-F).

Collins began recording in 1960 and released singles, including many instrumentals such as the million selling "Frosty". In the spring of 1965 he moved to Kansas City, Missouri and made a name for himself.

Many of Kansas City's recording studios had closed by the mid 1960s. Unable to record, Collins moved to California in 1967. He settled in San Francisco and played many of the venues popular with the counter-culture. In early 1969 after playing a concert with Canned Heat, members of this band introduced him to Liberty Records. In appreciation, part of the title of Collins' first record for United Artists - "Love Can Be Found Anywhere (Even In A Guitar)/Trash Talkin'" - was taken from the lyrics of "Refried Hockey Boogie". Collins signed and released his first album on Imperial Records, a sister label, in 1968.

Collins remained in California for another five years, and was popular on double-billed shows at The Fillmore and the Winterland. Collins moved back to Texas in 1973 and formed a new band. He was signed to Alligator Records in 1978 and recorded and released Ice Pickin'. He would record seven more albums with the label, before being signed to Point Blank Records in 1990.

In 1983, when he won the W. C. Handy Award for his album Don't Lose Your Cool, which won the award for best blues album of the year. In 1985, he shared a Grammy for the album Showdown!, which he recorded with Robert Cray and Johnny Copeland. The following year his solo release Cold Snap was also nominated for a Grammy. In 1987, John Zorn enlisted him to play lead guitar in a suite he had composed especially for him, entitled "Two-lane Highway," on Zorn's album Spillane.

Alongside George Thorogood and the Destroyers and Bo Diddley, Collins performed at Live Aid in 1985, playing "Who Do You Love?", "The Sky Is Crying" and "Madison Blues", at Philadelphia's JFK Stadium. He was the only black blues artist to appear.

Collins was invited to play at the 'Legends Of Guitar Festival' concerts in Seville, Spain at the Expo in 1992, where amongst others, he played "Iceman", the title track from his final studio album.

He made his last visit to London, England in March 1993.

After falling ill at a show in Switzerland in late July 1993, he was diagnosed in mid August with lung cancer which had metastasized to his liver, with an expected survival time of four months. Parts of his last album, Live '92/'93, were recorded at shows that September; he died shortly afterwards, in November at the age of 61. He was survived by his wife, Gwendolyn and father, Andy Thomas. He is interred at the Davis Memorial Park, Las Vegas, Nevada.

Collins will be remembered not only for the quantity of quality blues music that he put out throughout his career that has inspired so many other blues musicians, but also for his legendary live performances, where he would frequently come down from the stage and mingle with the audience whilst still playing. This practice was illustrated in Collins' uncredited cameo appearance in the film Adventures in Babysitting. He insisted to Elisabeth Shue that "nobody leaves here without singin' the blues", forcing the children to improvise a song before escaping.

Another instance of Collins' humorous stage presence was recounted in the film documentary, Antones: Austin's Home of the Blues. Collins left the building, still plugged in and playing. Several minutes after Collins returned to the stage, a pizza delivery man came in and gave Collins the pizza he had just ordered when he left the building. Collins had gone to Milto's Pizza & Pasta through an adjoining alley and ordered while he was still playing.