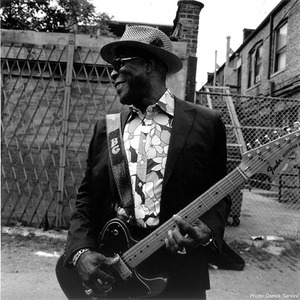 Buddy Guy (born George Guy, July 30, 1936 in Lettsworth, Louisiana) is an American blues music and rock music guitarist, as well as a singer. Known as an inspiration to Jimi Hendrix and other 1960s blues and rock legends, Guy is considered as an important proponent of chicago blues made famous by Muddy Waters and Howlin' Wolf. He has influenced both widely known and local blues guitarists. Guy is known for his showmanship; for example...

Guy is known for his showmanship; for example, he plays with drumsticks and walks into the audience whilst playing, the latter being a gimmick he picked up from a local blues guitarist at an early age (joining or leaping into the audience has also long been common in both American popular and gospel music, as in the earlier work of Big Jay Mcneely or the Dixie Hummingbirds).

Guy grew up in Louisiana where he learned to play guitar. In the early 1950s he began performing with bands in Baton Rouge. Soon after moving to Chicago in 1957, Guy fell under the influence of "Mighty" Muddy Waters. In 1958 he won a record contract with Artistic Records after beating the West Side guitarists Magic Sam and Otis Rush in a "Head Cutting Contest" at the Blue Flame Club. Soon afterwards he recorded for the Cobra label.

In the early 1960s, Guy was a session guitarist for Chess Records. He recorded on Junior Wells sessions for Delmark Records under the pseudonym Friendly Chap in 1965 and 1966. His career took off during a blues revival period in the late 1980s and early 1990s, and was sparked by Eric Clapton's request that Guy be part of the '24 nights' all-star blues guitar lineup at London's Royal Albert Hall and Guy's subsequent signing with Silvertone Records.

The Blues Is Alive And Well

This Is The Beginning: The Best Of The Aritistic, Cobra & U.S.A. Sessions