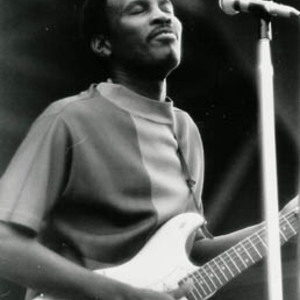 Samuel Gene Maghett Magic Sam (1937.02.14/Grenada, MS ? 1969.12.01/Chicago, IL) was generally acknowledged as among the most brilliant of the young up-and-coming guitarists on a crowded Chicago blues scene in the 1950s and 1960s. Along with players like Otis Rush and Buddy Guy, Magic Sam helped introduce a more modern sound on electric guitar to the blues. He also was a gifted, expressive singer who was certainly capable of producing music with crossover appeal, much as B.B. King had done.

Growing up in a farming family in the Delta, young Sam Maghett made his own primitive instruments from cigar boxes and wire, and taught himself to play the songs he heard on the radio. When he was thirteen, the family moved to Chicago. Within a few years, Maghett was playing gigs around town in Homesick James's band. By the time he was eighteen, Maghett was leading his own band under the stage name of Good Rockin' Sam. By age twenty, Magic Sam had both his new, permanent stage name and his first recording session, for the Cobra label. That first session produced All Your Love which for many years was his signature song (the melody of which was, by most accounts, reworked into quite a few of his other songs as well).

Sam recorded several other 45s for Cobra during the next few years, finding local success with 21 Days in Jail and Easy Baby. Cobra, however, folded in 1960. Around the same time, Maghett was drafted into the Army. Several of his biographies report that he went AWOL and returned home to Chicago. Some biographers report he received some time in the brig before a less than honorable discharge from the service. Whatever the details of his time in the military, by the early 1960s Maghett was again active performing around Chicago as Magic Sam. In 1963, he gained national attention for his single "Feelin' Good (We're Gonna Boogie)".

After successful touring of the United States, England and Germany, he was signed to Delmark Records in 1967. Magic Sam began a period of artistic inspiration and professional success that lasted until his death. The 1967 release of the album West Side Soul on Delmark brought Maghett renewed attention for his modern-sounding blues ? a music as accessible as the popular rock of the period. He even traveled to San Francisco to play at the Winterland and Fillmore clubs, which were generally associated with the top rock bands of that era. In 1968, he recorded his second Delmark album, Black Magic, which met with similar success on its release in 1969.

In August 1969, Maghett gave what was reportedly the performance of his life at the Ann Arbor Blues Festival ? a performance to rival that of Janis Joplin's at the 1967 Monterey Pop Festival, a performance that could lift an artist from regional favorite to national star. (His Ann Arbor performance was later released as Magic Sam Live by Delmark.) Stax Records was reportedly negotiating with Maghett at the time of his death of a heart attack on December 1, 1969. He was buried in the Restvale Cemetery in Alsip, Illinois.

Magic Sam's guitar style, vocals and songwriting ability have inspired and influenced many blues musicians ever since. In The Blues Brothers, Jake Blues dedicates the band's performance of "Sweet Home Chicago" to the "late, great Magic Sam". Magic Sam was posthumously inducted into the Blues Hall of Fame in 1982.

With A Feeling 57-67: The Cobra, Chief & Crash Recordings

The Essential Magic Sam: The Cobra And Chief Recordings 1957-1961