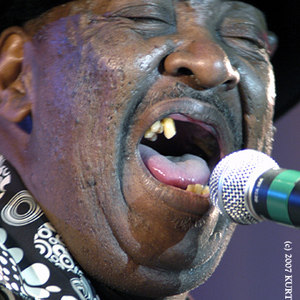 Magic (born Morris Holt in Torrence, Mississippi in 1937) Slim is a well-known Chicago blues guitarist who has led one of the major Chicago blues bands for about 30 years now. He first came to the city in 1955 with friend and mentor Magic Sam. The elder Magic (Sam) let the younger magic (Slim) play bass with his band and even gave him his nick-name. (the now-imposing Magic Slim was apparently bit leaner back in the fifties). Now, he's a big, gruff, hat-wearing fellow, whose guitar solos sizzle.

Guitarist John Primer played for him for 13 years. New City says of him, "Magic Slim provides a textbook example of what's missing in most of the rock-tainted contemporary blues of today... This band is unmatched for sheer joy, amazing guitar work without an afterthought, and a raucous good time."

He & his band The Teardrops, who the L.A. Weekly describes as "house rockers of the magnitude approaching the late Hound Dog Taylor" have a new record called Black Tornado (Blind Pig Records). Earlier releases include Spider in My Stew on Wolf Records, and a 1996 Blind Pig release called Scufflin'.

You Can't Lose What You Ain't Never Had (With Nick Holt)

Highway Is My Home