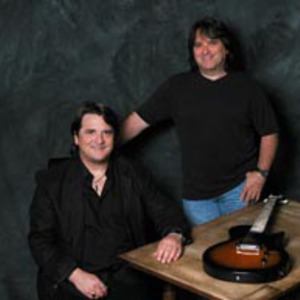 Since moving to Nashville, Tennessee in 1994 the Carter Brothers have grown musically and personally. They are and have been making quite a name for themselves not only with their music but personally as well. They are very approachable, kind and friendly folks and are very comfortable being around people who are the same. No put-ons here...these guys are the real deal. Dan and Tim Carter were born and raised into a rich musical heritage in North Carolina.

Dan and Tim Carter were born and raised into a rich musical heritage in North Carolina. They are blood relatives of the infamous 'Carter Family' musical dynasty. Drawing influences from the Appalachian folk, blues and bluegrass scene that has been so prominent there for several centuries, the Brothers also became very aware of the burgeoning folk-rock music that was developing on the West Coast in the late 60's and early 70's. After all, folks such as Jerry Garcia, David Grisman and various members of The Byrds were coming to North Carolina about that time to learn the styles of Bill Monroe, Earl Scruggs and Doc Watson, just to name a few. The soaring celtic folk~rock~blues of Led Zeppelin were and still are a major influence on the Brothers music. Being good honorable Southern boys Tim and Danny could not help but be influenced by the blues-jazz groove jams of the Allman Brothers, the sweltering slow funk of Little Feat and the melodic pop sounds of Tom Petty and the Heartbreakers.


In the early eighties, with their first recording in hand, Dan and Tim started touring the South with their band and quickly became recognized as a new musical force. With their undeniable soaring brotherly harmonies, the unusual mix of traditional acoustic instruments along with electric guitars, drums and keyboards they soon were traveling all over the U.S., Canada and Europe exciting audiences everywhere with their captivating stage presence and the dynamic quality of their music. This continued on into the mid 90's when the Brothers were signed to a recording deal with Capitol Records (they now record for various Independent labels) and decided to move to Nashville to pursue their individual artistic skills and to have a chance to record and perform with some of their musical 'heroes'. They moved into a two-story log house on a few acres of land in the hills north of town where they built ..The TreeHouse.. a recording studio to devote their time to writing and recording. Tim, along with his fine instrumental skills is quickly becoming recognized as a much in demand Grammy Award winning engineer and producer, when the Brothers aren't touring. Dan enjoys his passion for writing thoughtful, edgy music and lyrics through his own 'SpaceMan Music Publishing' and is associated also with 'DreamWorks Nashville'. The Brothers keep evolving musically and continue to tour and perform all over the world as a duo and with their various bands.

2007 marked the release of solo projects by both Tim Carter and Danny Reid Carter. Tim's CD is called 'Bang Bang Bang', and he sticks to his love for folk and progressive bluegrass music. Danny's new CD, Barcelona, further explores his folk-rock/blues/Americana roots. Both assembled all-star Nashville players to accompany them on each album and have hired a full time publicist to help promote the new releases as well as past Carter Brothers recordings.

In 2008, they will head back into the studio to record a new album together.

Cracks In the Floor