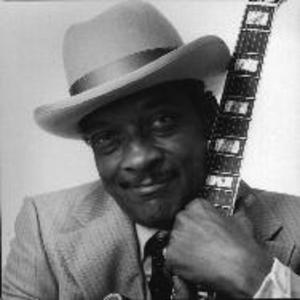 Hubert Sumlin (born November 16, 1931, died December 4, 2011) was a blues guitar player known as a both a solo artist and central element in Howlin' Wolf's backup band. Listed in Rolling Stone's The 100 Greatest Guitarists of All Time, he is cited as a major influence by many artists, including Eric Clapton, Keith Richards, Stevie Ray Vaughan, Jimmy Page, and Elliott Sharp. Hubert taught Stevie Vaughn to play many of his signature tunes while living in Austin, TX in the late 1970's.

Born in Greenwood, Mississippi, Sumlin was raised in Hughes, Arkansas. As a boy, Sumlin met Howlin' Wolf (Chester Burnett) by sneaking into a performance. Burnett invited Sumlin to play guitar in his Chicago-based band. Sumlin also briefly played guitar for Muddy Waters. Playing primarily as the lead guitarist in Burnett's band from the early 1950s until 1980, several years after Burnett's death, Sumlin has also recorded under his own name. His latest efforts were Doing the Don't with Elliott Sharp's Terraplane (2003) on Intuition Records, and About Them Shoes (2005) on Tone Cool Records. He underwent lung removal surgery in 2004. Sumlin died on December 4, 2011, in a hospital in Wayne, New Jersey, of heart failure at the age of 80. Mick Jagger and Keith Richards paid Sumlin's funeral costs

Howlin' For Hubert (With David Johanse)

My Guitar And Me