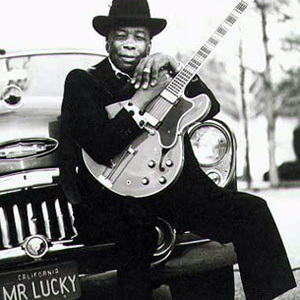 John Lee Hooker (Coahoma County, Mississippi, August 22, 1917 ? Los Altos, California, June 21, 2001) was an influential American post-war singer, guitarist, and songwriter. John Lee Hooker could be said to embody his own unique genre of the blues, often incorporating the boogie-woogie piano style and a driving rhythm into his masterful and idiosyncratic blues guitar and singing. His best known songs include "Boogie Chillen" (1948) and "Boom Boom" (1962).

John Lee Hooker could be said to embody his own unique genre of the blues, often incorporating the boogie-woogie piano style and a driving rhythm into his masterful and idiosyncratic blues guitar and singing. His best known songs include "Boogie Chillen" (1948) and "Boom Boom" (1962).

Hooker was the youngest of the eleven children of William Hooker (1871?1923), a sharecropper and a Baptist preacher, and Minnie Ramsey (1875??).
Hooker and his siblings were home-schooled. They were permitted to listen only to religious songs, with his earliest musical exposure being the spirituals sung in church.
In 1921, his parents separated. The next year, his mother married William Moore, a blues singer who provided John's first introduction to the guitar (and whom John would later credit for his distinctive playing style). The year after that (1923), John's natural father died; and at age 15, John ran away from home, never to see his mother and stepfather again.

He was a cousin of Earl Hooker,

Throughout the 1930s, Hooker lived in Memphis where he worked on Beale Street and occasionally performed at house parties. He worked in factories in various cities during World War II, drifting until he found himself in Detroit in 1948 working at Ford Motor Company. He felt right at home near the blues venues and saloons on Hastings Street, the heart of black entertainment on Detroit's east side. In a city noted for its piano players, guitar players were scarce. Performing in Detroit clubs, his popularity grew quickly, and seeking a louder instrument than his crude acoustic guitar, he bought his first electric guitar.

Though he stuttered slightly in his normal speech, he performed in a half-spoken style that became his trademark. Rhythmically, his music was free, a property common with early acoustic delta blues musicians. His vocal phrasing was less closely tied to specific bars than most blues singers'. This casual, rambling style had been gradually diminishing with the onset of electric blues bands from Chicago but, even when not playing solo, Hooker retained it in his sound.

Hooker's recording career began in 1948 with the hit single, "Boogie Chillen" cut in a studio near Wayne State University.

Despite being illiterate, he was a prolific lyricist. In addition to adapting the occasionally traditional blues lyric (such as "if I was chief of police, I would run her right out of town"), he freely invented many of his songs from scratch. Recording studios in the 50s rarely paid black musicians more than a pittance, so Hooker would spend the night wandering from studio to studio, coming up with new songs or variations on his songs for each studio. Due to his recording contract, he would record these songs under obvious pseudonyms such as "John Lee Booker," "Johnny Hooker", or "John Cooker".

His early solo songs were recorded under Bernie Besman.
John Lee Hooker rarely played on a standard beat, changing tempo to fit the needs of the song. This made it nearly impossible to add backing tracks. As a result, Besman would record Hooker, in addition to playing guitar and singing, stomping along with the music on a wooden palette.

John Lee Hooker's guitar playing is closely aligned with piano boogie woogie. He would play the walking bass pattern with his thumb, stopping to emphasize the end of a line with a series of trills, done by rapid hammer-ons and pull-offs. The songs that most epitomize his early sound are "Boogie Chillen," about being 17 and wanting to go out to dance at the Boogie clubs, "Baby Please Don't Go," a more typical blues song, summed up by its title, and "Tupelo," a stunningly sad song about the flooding of Tupelo, Mississippi.

He maintained a solo career, popular with blues and folk music fans of the early 1960s and crossed over to white audiences, giving an early opportunity to the young Bob Dylan. As he got older, he added more and more people to his band, changing his live show from simply Hooker with his guitar to a large band, with Hooker singing.


In 1989 he joined with a number of musicians, including Keith Richards and Carlos Santana to record The Healer, which won a Grammy award ? one of many awards.

He fell ill just before a tour of Europe in 2001 and died soon afterwards at the age of 83.

Hooker recorded over 100 albums and lived the last years of his life in San Francisco, California, where he licensed a nightclub to use the name Boom Boom Room, after one of his hits.

Among his many awards, John Lee Hooker has a star on the Hollywood Walk of Fame.

John Lee recorded several songs with Van Morrison, including "Never Get Out Of These Blues Alive", "The Healing Game" and "I Cover The Waterfront". He also appeared on stage with Van Morrison several times, some of which was released on the live album "A Night In San Francisco".

John Lee also recorded in the sixties with british blues band The Groundhogs. These recordings are still available as a CD "John Lee Hooker With The Groundhogs". More importantly, Hooker recorded with the blues-rock outfit Canned Heat, delivering the album 'Hooker N' Heat' in 1971. Hooker was influential and topical even in his lifetime, as evidenced in the MC5 cover of "Motor City's Burning" on their first album, recorded almost immediately after the riots which are the song's topic.

King Of The Boogie CD5

King Of The Boogie CD4

King Of The Boogie CD3

King Of The Boogie CD2

King Of The Boogie CD1