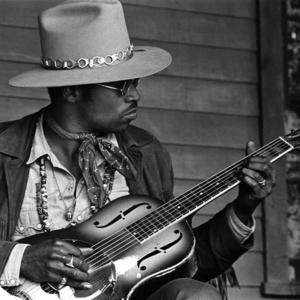 Taj Mahal (born Henry Saint Clair Fredericks in New York City on May 17, 1942) is an American Grammy Award-winning blues musician who incorporates elements of world music into his music. A self-taught singer-songwriter and film composer who plays the guitar, banjo and harmonica (among many other instruments), Mahal has done much to reshape the definition and scope of blues music over the course of his 50 year career by fusing it with non-traditional forms, including sounds from the Caribbean, Africa and the South Pacific.

After college, Mahal moved to Los Angeles and formed the group Rising Sons with Ry Cooder in 1964. The group signed with Columbia Records and released one single and recorded another album which was not released by Columbia until 1992. Taj, frustrated with the mixed reaction to his music quit the group and went solo. Still with Columbia, he released a well received, self titled album in 1968, and based on its success released a second album, Natch'l Blues that same year. Two very different records - Giant Step, with his electric band, and solo De Ole Folks At Home - were released in 1969 together as a double album. This firmly established Taj as an American blues original. The double album The Real Thing, captured him live at this time, with a horn section.

He has received two Grammy awards in the category "Best Contemporary Blues Album", the first in 1997 for Se&ntilde;or Blues, and again in 2000 for Shoutin' In Key. He has performed on various film soundtracks including Sounder and Blues Brothers 2000, in which he also appeared.