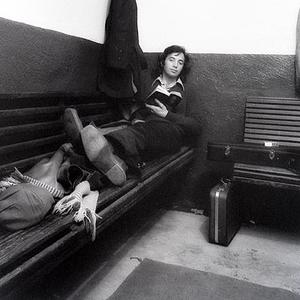 Ryland "Ry" Peter Cooder (b. 1947) is a guitarist, singer and composer from the United States. Ry is known mostly for his brilliant slide guitar work, his passion for American roots music, and for his collaborations with The Rolling Stones as well as many other musicians from countries all around the world. Born in Los Angeles, California on 15th March 1947, Cooder first attracted attention in the 1960s, playing with Captain Beefheart & His Magic Band, after having worked with Taj Mahal in The Rising Sons.

Born in Los Angeles, California on 15th March 1947, Cooder first attracted attention in the 1960s, playing with Captain Beefheart & His Magic Band, after having worked with Taj Mahal in The Rising Sons.

He was a session guitarist on various recording sessions with The Rolling Stones in 1968 and 1969; most notably Cooder's contributions appear on the Stones' Beggars Banquet where he shares a prominent credit with pianist, Nicky Hopkins on the back cover. He continued to appear on the suceeding albums, Let It Bleed, and (most significantly) Sticky Fingers, on which he contributed the haunting slide guitar solo to "Sister Morphine". Cooder is reputed to have taught Keith Richards to play in open-G tuning, now a Richards hallmark, as well as to have written the open-G signature riff of "Honky Tonk Women". He was briefly considered to fill the departed Brian Jones' place in the Rolling Stones, but reportedly Cooder and Keith Richards did not get along very well. For some time after the sessions, Cooder accused Keith Richards of "ripping him off" musically, but now refuses to talk about his experiences with the Stones. Cooder played slide guitar for the 1970 film Performance, which contained Mick Jagger's first solo single, "Memo From Turner" on which Cooder played guitar.

Throughout the 1970s Cooder released a series of Warner Brothers albums that showcased his guitar work, to some degree. In this respect, Cooder's guitar work on these records is not unlike the guitar playing of Robbie Robertson on The Band's albums: Both virtuosos emphasized song over solo. Cooder's 1970s albums spotlight, more than anything, a wide-ranging taste in music. Cooder has been seen as almost a musicologist, exploring bygone musical genres with personalized and sensitive, updated reworkings of revered originals. Cooder's 1970s albums (with the exception of Jazz) cannot be neatly pigeonholed by genre, But - to generalise broadly - it might be fair to call Cooder's first album blues; Into the Purple Valley, Boomer's Story, and Paradise and Lunch, folk + blues; Chicken Skin Music and Showtime, a unique melange of Tex-Mex and Hawaiian; Jazz, 1920s jazz; Bop Till You Drop 1950s R&B and blues; and Borderline an eclectic mix of Tex-Mex with blues, R&B, and country and Get Rhythm, with more rock-based excursions.

Cooder has worked as a studio musician and has also scored many film soundtracks, of which perhaps the best known is that for the 1984 Wim Wenders film Paris, Texas. Ry Cooder based this soundtrack, and the haunting title song "Paris, Texas" on Blind Willie Johnson's "Dark Was the Night (Cold Was the Ground)", which he described as "The most soulful, transcendent piece in all music from the US." His other film work includes Walter Hill's The Long Riders (1980) and Southern Comfort (1981).

In recent years, Cooder has played a role in the increased appreciation of traditional Cuban music, due to his collaboration as producer in the Buena Vista Social Club (1997) recording, which was a worldwide hit. Wim Wenders directed a documentary film of the musicians involved, Buena Vista Social Club (1999) which was nominated for an Academy Award in 2000. Cooder worked with Tuvan throat singers for the score to the 1993 film Geronimo: An American Legend.

Cooder's solo work has been an eclectic mix, taking in dust bowl folk, blues, Tex-Mex, soul, gospel, rock, and almost everything else. He has collaborated with many important musicians, including the Rolling Stones, Little Feat, The Chieftains, John Lee Hooker, Gabby Pahinui, and Ali Farka Toure. He formed the Little Village supergroup with Nick Lowe, John Hiatt, and Jim Keltner.

Cooder's 1979 album Bop Till You Drop was the first popular music album to be recorded digitally. It yielded his biggest hit, a disco/R&B cover of Elvis Presley's 1960s recording "Little Sister".