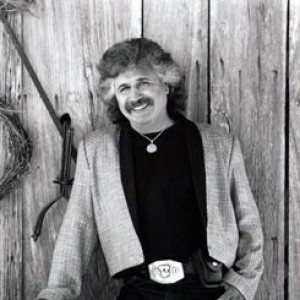 Freddy Fender (born Baldemar Garza Huerta in San Benito, Texas, USA on 4 June 1937 ? 14 October 2006) was a Mexican-American tejano, country and rock and roll musician, known for his work as a solo artist and in the groups Los Super Seven and the Texas Tornados. He is best known for his 1975 hits "Before the Next Teardrop Falls" and the subsequent remake of his own "Wasted Days and Wasted Nights".

In 1959, Fender recorded the blues ballad "Wasted Days and Wasted Nights." The song became popular in 1959, but he was beset by legal troubles after he and a band member were arrested for possession of marijuana. After a two years in Louisiana's Angola prison farm, he was released through the intercession of Gov. Jimmie Davis, also a songwriter and musician. Davis requested that Fender stay away from music while on probation as a condition of his release. By the end of the 1960s, Fender was back in Texas working as a mechanic, and attending a local junior college, while only playing music on the weekends.

Number One Pop and Country
In 1974, Fender recorded "Before The Next Teardrop Falls." The single was selected for national distribution, and became a number one hit on the Billboard Country and Pop charts. His next four singles, including a remake of "Wasted Days", all hit the number one spot on the Billboard Country charts. During the next few years, Fender had several major country hits, including the No. 1 hits "Secret Love" (1975) and "You'll Lose a Good Thing" (1976).

Texas Tornados
In the 1990s, Fender teamed up with fellow Tex-Mex musicians Doug Sahm, Flaco Jimenez and Augie Myers to form the Tex-Mex supergroup the Texas Tornados, whose work was widely acclaimed. Following the death of Sahm, the production of the Tornadoes slowed.

Los Super Seven
Freddy Fender continued to still be on top with a groundbreaking collaboration with several musical legends to produce another supergroup, Los Super Seven which consisted of David Hidalgo (vocals, guitar, drums, bass, percussion, requinto, hidalguera); Rick Trevino, Joe Ely (vocals, guitar); Flaco Jimenez (vocals, accordion); Cesar Rosas (vocals, six-string bass, guitar, guitarron, jarana); Freddy Fender (vocals, acoustic bass); Ruben Ramos (vocals). This Super Seven effort won a Grammy in 1999.
On February 4, 1999, Freddy's star was installed on the Hollywood Walk of Fame.
In 2004, the Texas Folklife Resources produced a widely acclaimed sell-out show at the Paramount in Austin, Texas " Fifty Years of Freddy Fender", where Freddy was honored and then performed to a packed house. Also in 2004, Freddy's hometown of San Benito Texas honored Freddy with his likeness emblazoned on their new watertower with "Hometown of Freddy Fender". Freddy would later say that this honor meant more to him than any other accolade he had ever won.

Freddy Fender's Masterpiece...
La Musica De Baldemar Huerta
Freddy delves deeply into the music of his forefathers: the boleros and rancheras that would have played in the ghettos of his native San Benito, Texas, and that he sang as a youth in border-town cantinas. Especially gorgeous are "Adios Muchachos," a melancholy meditation on final farewells, and the delicate opener, "Rayito de Luna." El Be Bop Kid isn't just back; he sounds reborn. Freddy won his last grammy for this album.

Freddy Fender underwent a kidney transplant in 2002 donated by his daughter and a transplant of the liver in 2004. Nonetheless, his condition continued to worsen. He was suffering from an "incurable cancer" in which he had tumors on his lungs. On December 31, 2005, Fender performed his last concert and resumed chemotherapy.

Fender has Passed on...
Rest in Peace, Vaya Con Dios
Freddy Fender passed away on Saturday, October 14, 2006, after a long battle with lung cancer. He is buried in his Hometown of San Benito, Texas.

Plans are underway for a Freddy Fender Museum to be located in his beloved hometown, San Benito, Texas. Check back at: www.freddyfendermuseum.org or
www.freddyfender.com

The Hits And More CD3

The Hits And More CD1

Close To My Heart