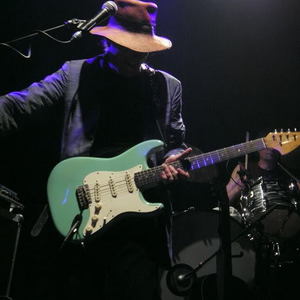 Gary Lucas is an acclaimed American guitarist, a Grammy-nominated songwriter, and an international recording artist with over a dozen solo albums to date, and a soundtrack composer for film and television. He has been described as "one of the best and most original guitarists in America" (David Fricke, 16 Nov. 2006, Rolling Stone); a "legendary leftfield guitarist" (The Guardian, 24 Dec. 2005); "the thinking man's guitar hero" (The New Yorker, 8 Jan. 2007), and one of "the most innovative and challenging guitarists playing today" (fRoots, March 2002).

Lucas tours the world solo, as well as with several different ensembles including his longtime band NYC-based group, Gods and Monsters, a psychedelic rock band based around Lucas's guitar playing and songwriting. The band recently completed a tour of Moscow and St. Petersburg, Russia in the company of former Talking Heads keyboardist/producer Jerry Harrison, currently a member of the band and the producer of their most recent album. Other regular members of the band include Ernie Brooks, Jason Candler, and Billy Ficca. Lucas also lectures on guitar and the music business in general. As of 2007, Lucas has performed in some 35 countries.

Biography
Gary Lucas was born in Syracuse, New York USA. He obtained a degree in English from Yale University (1974), before establishing his career in music first as a college DJ and then as Music Director at his college radio station, WYBC FM. He married his wife, Caroline (ne? Sinclair, from London England), in 1984, and presently lives in New York City.

Early career
According to his website, Lucas was encouraged by his father to try the guitar at age 9, and briefly dabbled with other instruments at school, and played with various groups and combos in the 1960s, during his teens. During his senior year at high school he played for the documentary film unit of the Upstate Medical Center and scored on his first film assignment. In his sophomore year he travelled on what he calls a "pilgrimage" to see childhood hero Captain Beefheart (alias Don Van Vliet), with whom he later formed a strong friendship. From being a Beefheart fan Gary eventually became Van Vliet's co-manager and occasionally performed on stage during the 1980/81 tours - reciting a poem (usually "One Man Sentence", sometimes "Untitled") or performing the solo guitar piece "Flavor Bud Living".

After gaining his degree, Lucas played for a few years for "O-Bay-Gone Band" before gaining a significant step in his career during 1980 - 82, when he was engaged to record on two Beefheart albums released by Virgin Records, one of which he was full time lead alongside Moris Tepper. Over a period of five years with the last incarnation of Beefheart's Magic Band, Lucas distinguished himself as an interpreter of Beefheart's difficult music. His solo guitar pieces on Doc at The Radar Station (1980) and Ice Cream For Crow (1982) featured his solo renditions of Van Vliet's twisted instrumental compositions, "Flavor Bud Living" and "Evening Bell". Of the latter, Esquire wrote "Gary Lucas apparently grew extra fingers in order to negotiate his way through it".

Although Captain Beefheart retired in the 1980s, Lucas continues to be associated with the Magic Band's former members, and the band continues to be creatively active - several of Van Vliet's former band members recently reformed as a group, touring as The Magic Band from 2003 to 2006. Their 2007 double album and DVD, 21st Century Mirror Men followed-up their debut album Back to the Front which was chosen as one of the best albums of 2004 by The Wire.

In 1988, Lucas mounted his first solo guitar show at New York's Knitting Factory. Shortly after his first gig, he was invited to appear at the 1988 JazzFest Berlin, where the Berliner Morgenpost raved in a banner headline after his performance, "It is Lucas!"

Concerts and tours
His Australian debut was made in the company of UK electronica band Future Sound Of London. He has been a regular visitor to London's Royal Festival Hall (five appearances) and Amsterdam's famed Paradiso (17 appearances since 1980).

Lucas recently returned from his fourth tour of Russia, where he performed his original solo guitar score accompanying the silent classic German horror film The Golem (1920) in Moscow and Saint Petersburg and appeared on national TV before an estimated 50 million viewers, as well as being feted in the Russian edition of Rolling Stone. He's played with The Golem all over the world since debuting his live score in 1989 at the BAM Next Wave Festival?including performing at the Venice Biennale, London's Royal Festival Hall, the New York Jewish Film Festival at Lincoln Center, as part of a week long artist-in-residency at the Quebec City Summer Festival, at the Alien artist H. R. Giger's Retrospective in Prague (home of the Golem) this spring, at Atlanta's Dragon Con, the largest science fiction festival in the world, and at this year's fifth annual Pop Montreal music and film festival.

Other recent concert appearances include a concert at the Czech Embassy in Washington DC by invitation of the Czech ambassador to the US spotlighting Lucas's solo guitar arrangements of Czech classical music in honor of the 14th anniversary of the Czech Velvet Revolution (Lucas is of Bohemian descent on his father's side). Lucas made an extensive solo acoustic tour of Spain last year.

Lucas co-leads a jazz-oriented, all instrumental Beefheart tribute ensemble, Fast 'n' Bulbous, who made appearances at the Frankfurt Jazz Festival and the Jazz Em Agosto Festival in Lisbon during 2006. Their debut album Pork Chop Blue Around the Rind was profiled on NPR and charted on college radio in the US. In Fall, 2006, they toured Europe extensively, selling out shows at the London Jazz Festival, in Amsterdam's BimHuis, as well as playing in Bern, Vienna, Schwaz and Ljubljana Slovenia.

Lucas co-wrote two of Jeff Buckley's most famous hits, "Grace" and "Mojo Pin", from Buckley's popular and critically acclaimed album Grace. Early collaborations can also be heard on the recent Jeff Buckley and Gary Lucas album Songs To No One, which charted internationally with worldwide sales approaching 100,000.

The Edge of Heaven, an album of Lucas's lush arrangements of classic Chinese pop tunes from the 1930s, has a distinctly bluesy feel. It received positive international reviews from Rolling Stone to The Wall Street Journal to the Hong Kong Music Weekly. It was #1 on the World Music Charts in Canada and garnered international attention, England's Q magazine awarding it 4 Stars, and Mojo writing: "It is simply gorgeous." The album was chosen as one of the Best Discs of the year in France's Lib?ration newspaper. There was a lengthy profile for the album in The Wall Street Journal, as well as an NPR interview.

Lucas has played at the UK's famed Glastonbury Festival, at London's Shepherd's Bush Empire and at the All Tomorrow's Parties festival in LA and Camber Sands in the UK.

Other recognition
In the last few years Lucas has been profiled in the International Herald Tribune, Lib?ration, and featured on the cover of The Forward as well as the national Dutch newspaper Het Parool. According to Captain Beefheart:

"Since the end of the Magic Band, he has been very prolific in his own right, solo and within a band, releasing almost an album a year since 1991. His virtuoso solo live shows are awesome in the sounds he extracts from his guitar."

The Edge Of Heaven

Skeleton At The Feast