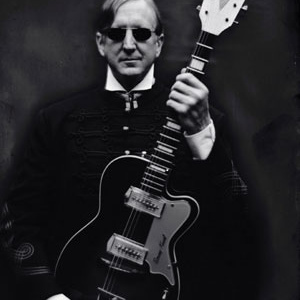 T-Bone Burnett (born Joseph Henry Burnett) is perhaps best known as a producer of other artists, such as Robert Plant & Alison Krauss, Counting Crows, The Wallflowers, Los Lobos, Gillian Welch, Kris Kristofferson, Cassandra Wilson, Elvis Costello, Autolux, and his ex-wife Sam Phillips. He is known for very natural-sounding productions. In his solo work, he is a respected, if quirky, singer/songwriter.

He has also worked on the soundtracks of several films by the Coen Brothers (including the very successful O Brother, Where Art Thou? soundtrack, which won him a Grammy Award), as well as Cold Mountain and Walk the Line.

In the 70s, he was a member of the Alpha Band and toured as part of Bob Dylan's Rolling Thunder Review.

His first album of new solo material since 1992, The True False Identity, and the career retrospective Twenty Twenty: The Esssential T-Bone Burnett were both released in May 2006.

In 1997, Burnett created new songs for the Sam Shepard play The Tooth of Crime: Second Dance, which premiered in New York City the same year in an off-Broadway production that featured Vincent D'Onofrio and Kirk Acevedo. A CD of these songs (Tooth of Crime) was released in May, 2008.

A Place At The Table

Proof Through The Night & The Complete Trap Door CD2

Proof Through The Night & The Complete Trap Door CD1

The Criminal Under My Own Hat