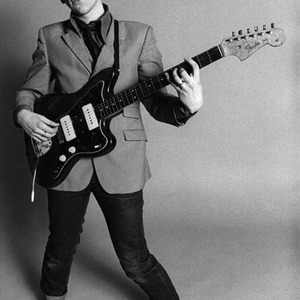 Elvis Costello (born Declan Patrick MacManus on 25 August 1954) is an English singer-songwriter. He came to prominence as an early participant in London's pub rock scene in the mid-1970s and soon became associated with the punk/New Wave genre (as Elvis Costello & The Attractions). In a long and successful career, Costello has released over 30 studio albums on his own and with the Attractions, the Imposters, and other collaborations.

Born in St Mary's Hospital, Paddington in London, Costello is the son of trumpeter, vocalist and band-leader Ronald (?Ross?) MacManus and record store manager Lillian Costello. His family had roots in Merseyside and he moved to Birkenhead at age 16, with his mother, when his parents separated.

While he is better known as Elvis Costello - a stage name suggested by Stiff Records manager Jake Riviera - he has used many other aliases including The Imposter and Napoleon Dynamite*.

In the early 1970s Costello was a participant in London's pub rock scene with the group Flip City. Then in 1977 along with fellow Pub-Rockers Nick Lowe and Ian Dury he made his first releases on the independent label Stiff, tailoring his work towards the punk and new wave scenes. From 1980's Armed Forces onwards, however, other influences including soul, country, 1960s pop, and classical music began to re-emerge, and he soon became established as a unique and original voice. His output has been wildly diverse: one critic has written that "Costello, the pop encyclopedia, can reinvent the past in his own image".

His prolific and varied 30-year career has been marked by two constants: sharp songwriting and musical restlessness. The latter has seen him dabble in almost every musical form, from country to jazz to orchestral. This stems from the fact that, at heart, Costello is a fan. His desire to work with his musical heroes has attracted collaborators as diverse as Burt Bacharach and Paul McCartney, Anne Sofie von Otter, Allen Toussaint, Aimee Mann, Bill Frisell, and Brian Eno.

But his most successful partners were his long-term band The Attractions. They comprised Steve Nieve (keyboards), Pete Thomas (drums) and Bruce Thomas (bass). Between 1978 and 1983, this outfit produced a peerless series of albums: This Year's Model; Armed Forces; Get Happy!!; Almost Blue; Trust; Imperial Bedroom and Punch the Clock.

These recordings drew on styles spanning soul, country and western and commercial pop. It was only with 1984's Goodbye Cruel World that Costello started to stumble. An album he concedes was one of his worst, it ushered in a period which produced interesting music but lacked the consistent quality of his halcyon days. Interestingly, although he enlisted the other Elvis's band for King of America in 1986, it was a reunion with The Attractions and former producer Nick Lowe that produced his best album of the late 1980s in the form of the scabrous Blood and Chocolate.

The following albums, Spike and Mighty Like a Rose were uncompromising and difficult solo works, as was the string quartet collaboration The Juliet Letters in 1993. It was only reconvening the Attractions for Brutal Youth the following year that gave his fans another glimpse of what first attracted them to him: punchy, angry pop songs, tightly played by an impeccably taut ensemble.

Since then, Costello has become a career dilettante, true to his inner musical quest, but never again returning to heights he scaled in the early 1980s. Maybe the best work of this latter period was 1998's Painted from Memory. This joint effort with Burt Bacharach matched restrained writing from Costello with stately Bacharach arrangements.

Subsequent career nadirs such as the tune-free North (2003), and instrumental orchestral works such as Il Sogno (2004) led many long-term admirers to conclude that Costello had retained his integrity at the expense of his real musical strengths. However, he has given occasional evidence of his former fire. The ballsy bar-room atmosphere of the collaborative The Delivery Man (2004), suggests that he is still capable of giving his fans what they want, in between his more esoteric experiments.

Elvis is married to jazz vocalist Diana Krall and they have twin sons.

*Upon the film's release, it was noted that the name "Napoleon Dynamite" had originally been used by musician Elvis Costello, most visibly on his 1986 album Blood and Chocolate, although he had used the pseudonym on a single B-side as early as 1982. Filmmaker Jared Hess claims that he was not aware of Costello's use of the name until two days before the end of shooting, when he was informed by a teenage extra. He later said, "Had I known that name was used by anybody else prior to shooting the whole film, it definitely would have been changed ... I listen to hip-hop, dude. It's a pretty embarrassing coincidence." Hess claims that "Napoleon Dynamite" was the name of a man he met around the year 2000 on the streets of Cicero, Illinois while doing missionary work for the Mormon Church.

Costello believes that Hess stole the name: "The guy just denies completely that I made the name up... but I invented it. Maybe somebody told him the name and he truly feels that he came about it by chance. But it's two words that you're never going to hear together." To date, Costello has taken no legal action against the film.

Elvis Costello and Elton John to Make a Television 'Spectacle'

Two of the most respected musicians in the world will collaborate on an extraordinary new television series.

"Spectacle: Elvis Costello with..." is hosted by its namesake and produced in conjunction with Sir Elton John's Rocket Pictures. Elton John will be one of the program's Executive Producers.

The series begain airing in 2008 on CTV in Canada, Channel 4 in the UK and Sundance Channel in the US. FremantleMedia Enterprises, will handle sales of the show to the rest of the world.

Conceived to provide a forum for in-depth discussion and performance with the most interesting and influential artists and personalities of our time, the show fuses the best of talk and music television.

"Spectacle: Elvis Costello with..." is an unpredictable and unprecedented television experience. The series of 13 one-hour programs features everything from intimate one-on-ones with legendary performers and notable newcomers to thematic panel discussions, with a variety of performance elements including unique collaborations, acoustic and impromptu "illustrative" demonstrations of the creative process, and some original interpretations of others' songs by Costello.

The Resurrection Of Rust

The Boy Named If

Wise Up Ghost (Deluxe Version) (With The Roots)