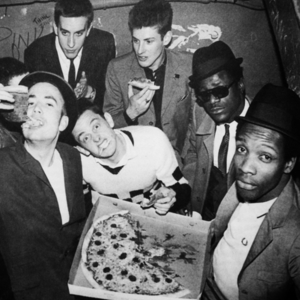 The Specials (sometimes called The Special AKA) are an English "2 Tone" ska revival band formed in 1977 in Coventry, England. Their music combines a danceable ska beat with punk's energy, underpinned by an informed political and social stance. The group was formed by songwriter/keyboardist Jerry Dammers, with Terry Hall (vocals), Lynval Golding (guitar, vocals) and a rhythm section featuring Horace Panter (bass) and John Bradbury (drums).

In 1979, their debut LP hit the shelves and quickly soared into the UK Top Five. The album was produced by Elvis Costello and was released under founding member, Jerry Dammer's record label 2 Tone Records.

Following the success of their debut album, Specials, their second and final album, More Specials was released. This expanded the group's 2 tone sound to include lounge music and other influences.

After two albums and a string of very successful singles the band called it quits in 1984. The bands members moved onto their other musical projects. In 1994 they toured with the original line-up without Terry Hall and Jerry Dammers. Roddy sang Terry's parts. The line-up changed in 1996. The band split again in 2001.

In 2008, The Specials officially announced that they would reform and embark on a 30th Anniversary Tour in 2009. The founding member, Jerry Dammers is not part of the newly reformed Specials and relationships between him and the rest of the band are still sore, particularly on Dammers' side of things.