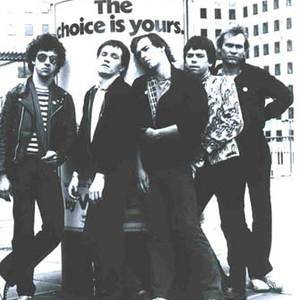 The Members were formed in 1977 by Nicky Tesco. Tesco was a graduate who, having failed to emigrate to Canada, had returned to Camberley, Surrey UK, and had been working in a variety of jobs when the opportunity arose to form a band. Linking up with a friend and local guitarist Gary Baker an initial four piece was formed. Tesco soon added trainee merchant banker Jean Marie Carroll, known as JC, to the line up having been a long admirer of his style and songwriting abilities.

Carroll was dismissed by other members of the band but it was the Tesco-Carroll axis that dominated the band and instigated the line up changes. The 1977 to 1983 line up was Nicky Tesco (vocals), JC (vocals & guitar), Nigel Bennett (guitar), Chris Payne (bass) and Adrian Lillywhite (drums). That Line up reformed in 2006 to play two shows. In 2009 the band released an updated version of the classic Offshore Banking Business single called International Financial Crisis. Carroll Payne and New Drummer Nick Cash (began touring again) Tesco having retired for health reasons and Bennett having joined the Vibrators. 2010 saw them record a Live album in Berlin (Live in Berlin) and perform at the Isle of Wight and Glastonbury festivals and Tour Europe. cash had to pull out due to health reasons in December 2010 and was replaced by Punk Rock Legend Rat Scabies.

Sound Of The Suburbs

At The Chelsea Nightclub