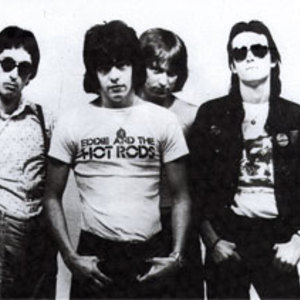 The British pub rock/punk rock band Eddie & the Hot Rods was originally formed under the name Buckshee in 1973. They rehearsed in drummer Steve Nicol's garage in Rochford Essex. Bassist Rob Steel was known by his nickname, The Hustler. They changed their name to Eddie and the Hot Rods after Dave Higgs joined. He was more experienced and it was his input at this early stage that helped them to gel and get gigs, eventually, in 1975, hitting the London pub rock circuit.

They are often considered as one of the many punk rock bands that sprang from that city in the mid-Seventies, but in fact saw themselves as more influenced by groups like The Who and The Kinks, and other pub rock acts such as Dr Feelgood or Graham Parker & the Rumour. Their brand of energetic r&b was over-trumped massively by the punk explosion, and they withered away. The repertoire consisted of chicago blues or soul covers plus tunes in a similar vein written by the band's guitarist Dave Higgs.

Before rising to semi-stardom in 1977, the Hot Rods underwent several changes in personnel: One of the first members to leave the band was Eddie himself, a dummy that featured prominently in the Hot Rods' early gigs and was discarded as the joke had worn thin. Otherwise, the band consisted of Barrie Masters on vocals, Pete Wall and Dave Higgs on guitar, Rob Steel on bass and Steve Nicol on drums. Ed Hollis, brother of Talk Talk's Mark Hollis became their manager, and the band were signed to Island Records.

By 1976, Lew Lewis (harmonica) and Paul Gray had replaced Wall and Steel. Lewis's tenure in the group lasted for the release of their first two singles before he too left. With this new line-up, the Hot Rods played a set at London's famous Marquee club - their opening act was a young band named Sex Pistols. They first appeared in the UK singles chart the end of that year with the "Live at the Marquee" EP and the single "Teenage Depression", an energetic rock'n'roll song.

After the release of the Teenage Depression LP, which gave them their first appearance in the UK albums chart, they recorded another EP called "Live - At the Sound Of Speed". During the gig from which this EP was recorded, Graeme Douglas (formerly of the Kursaal Flyers) joined the band onstage and jammed along adding extra lead lines. Afterwards his membership of the band was made permanent, and they set about writing and recording for their second album. The live recording of the "Sound of Speed" EP featured Douglas on only one track, he therefore set about recording additional lead guitar overdubs in the studio, though to keep in with the essence of a live release, he was only given one attempt at recording each song.

With the addition of Douglas, the band was moved in a more radio-friendly direction. Their biggest hit came with the Douglas/Hollis collaboration "Do Anything You Wanna Do" in the summer of 1977, under their shorter, snappier name 'The Rods'. This single made the British Top 10 (number 9 in August 1977) and also proved popular with the then predominant punk audience, as did that year's album Life on the Line. Still in 1977, the Hot Rods toured the America. When it came to recording a follow-up album, Thriller, the band tried hard to recapture the success of "Do Anything You Wanna Do", but to no avail. They found themselves sacked by their record company in 1979, and after Fish'n'Chips, another misguided effort for EMI, the Hot Rods disbanded in 1981.

At this point, Gray and Douglas had already left the band, the former joining The Damned. Masters teamed up with The Inmates. Ed Hollis went on to work with some of the best known acts of the punk era including The Damned, Elvis Costello, and Stiff Little Fingers.

In 1985 the band reform with Masters and Nichol joined by Warren Kennedy (guitar) and Russ Strutter (bass)and release a single and live mini-album, but after a couple of years this version of the band fizzles out.

In the early 1990s the 'classic' line-up (Masters, Nichol, Higgs, Douglas, and Gray) regrouped to play some live dates, by the mid 90s Masters, Gray and Nichol are joined by Manfred Mann guitarist Mick Rodgers to record the album Gasoline Days; plus in 2005 a Masters-led outfit recorded Better Late than Never in preparation for a 30th anniversary tour. The band is currently enjoying renewed popularity throughout Europe with regular tour dates, and is also performing in the U.S. after a 25 year sabbatical.

Doing Anything They Wanna Do...

Get Your Balls Off

The End Of The Beginning

Curse Of The Hot Rods