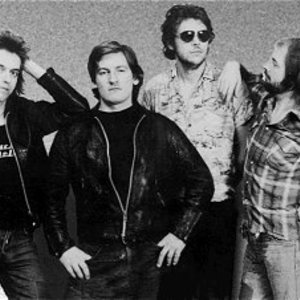 Ducks Deluxe were an English pub rock band of the 1970s. Usually called "The Ducks" by their fans, they were known in the 70s for their up-tempo, energetic performances. Formed in London in February 1972 by Martin Belmont (guitar), Sean Tyla (guitar), Ken Whaley (bass) and Michael Cousins (known as Magic Michael) on percussion, they split after playing a gig at the 100 Club in London on July 1, 1975.

The band reformed in 2007 with Martin Belmont (guitar), Sean Tyla (guitar), Kevin Foster (bass) and Jim Russell (drums). Inbetween times, various members of the band found a degree of fame with Graham Parker & The Rumour, the Tyla Gang and The Motors.

If the old scientific adage is true -- that for every action there is an equal and opposite reaction -- then British pub rockers Ducks Deluxe were purely and simply a reaction. With the mid-'70s English pop scene dominated by glitter/glam rockers like Gary Glitter and Sweet or blustery, chops-heavy art rockers like Yes, Jethro Tull, and Genesis, then Ducks Deluxe represented none of the above. One of the first pub rock bands, the Ducks played basic American-style blues and boogie with remarkable panache and thorough disregard for the whims of the zeitgeist. They never were hugely popular, but the unpretentious, do-it-yourself, working-class attitude they and their contemporaries exuded (most notably seminal pub rockers Dr. Feelgood) influenced the English punk scene that was right around the corner. With friends like Dave Edmunds producing their records, the Ducks (guitarist/vocalist Sean Tyla, guitarist Martin Belmont, bassist Nick Garvey, and keyboardist Andy McMasters) came up with engaging, though not life-changing, records that celebrated the simple joys of rock & roll. Sure, much of it sounds like recycled Chuck Berry, but there's an infectious enthusiasm that the fan in you, who simply wants to hoist a pint of ale and hear some Little Richard, will love. Ironically, their biggest promotional boost in America, the Ducks Deluxe LP was released three years after they'd split up. This little bit of shift marketing came as a result of all ex-Ducks going on to more prominent bands: The Motors (Garvey/McMasters), The Rumour (Belmont), and the Tyla Gang (Tyla).

Side Tracks And Smokers

Ducks Deluxe/Taxi to the Terminal Zone