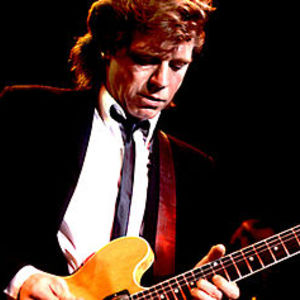 Dave Edmunds (born April 15, 1944) is a singer, guitarist and producer from Cardiff, Wales. Though he was primarily associated with pub rock and New Wave, and had numerous hits in the late 70's and early 80's, he was steadfastly devoted to pre-Beatles rock and roll. An infrequent songwriter, Edmunds has largely relied on cover songs or custom-written material to sustain his career. In the late 1960s he led a blues-rock trio called Love Sculpture, who scored a quasi-novelty hit by reworking Khachaturian's classical piece "Sabre Dance" as a speed-crazed rock number.

After Love Sculpture split, Edmunds had a number one single with "I Hear You Knocking", a Smiley Lewis cover. His only acting role followed, as a band member in the David Essex movie Stardust (1974 movie). After learning the trade of producer, culminating in a couple of singles in the style of Phil Spector, "Baby I Love You" and "Born To Be With You", he became linked with the pub rock movement of the early 1970s, producing Brinsley Schwarz, Ducks Deluxe, and also The Flamin' Groovies, using a stripped down, grittier sound.

His own solo LP from that era, Subtle As A Flying Mallet, was similar in style. In 1977, the Brinsley Schwarz connection brought about a collaboration with Nick Lowe under the name Rockpile, with Billy Bremner and Terry Williams. For contractual reasons they could not record as Rockpile until 1980, but contemporary solo LPs (such as Nick Lowe's Labour of Lust and Edmunds' own Repeat When Necessary) were in fact group recordings. Dave Edmunds had more hits during this time, including Elvis Costello's "Girls Talk", Nick Lowe's "I Knew The Bride", Hank DeVito's "Queen of Hearts" ), Graham Parker's "Crawling From The Wreckage", and Melvin Endsley's "Singing The Blues" (originally a hit for Guy Mitchell).

Unexpectedly, after Rockpile relased their first LP under their own name (1980's Seconds Of Pleasure), the band split, generally attributed to tensions between Edmunds and Lowe. Edmunds spent the 1980s collaborating with and producing an assortment of artists, from Paul McCartney to King Kurt, and from The Stray Cats to Status Quo. He recorded the soundtrack for Porky's Revenge, supplying the main theme, "High School Nights", and was the musical director for a television special starring Carl Perkins, with assorted guests including George Harrison, Ringo Starr, and Rosanne Cash.

On his 1983 and 1984 releases, Information and Riff Raff, Edmunds collaborated on two songs with Jeff Lynne, the lead musician of Electric Light Orchestra. He recorded less frequently after the mid 1980s.

The Many Sides Of Dave Edmunds - Greatest Hits & More

A Pile Of Rock Live