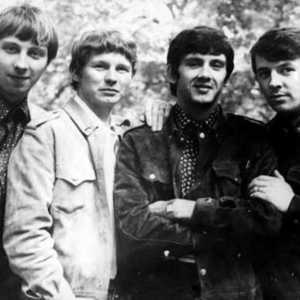 Originally founded as a skiffle group in Liverpool in 1959 by John McNally and Mike Pender (Mike Prendergast), the band took their name from the classic 1956 John Wayne western The Searchers. Prendergast claims that the name was his idea, but McNally ascribes it to 'Big Ron' Woodbridge, their first lead singer. The issue remains unresolved. The band grew out of an earlier skiffle group formed by McNally, with his friends Brian Dolan (guitar) and Tony West (bass). When the other two members lost interst McNally was joined by his guitarist neighbour Mike Prendergast.

The band grew out of an earlier skiffle group formed by McNally, with his friends Brian Dolan (guitar) and Tony West (bass). When the other two members lost interst McNally was joined by his guitarist neighbour Mike Prendergast. They soon recruited Tony Jackson with his home-made bass guitar and amplifier and styled themselves Tony and The Searchers with Joe Kelly on drums. Kelly soon left to be replaced by Norman McGarry and it is this line-up?McNally, Pender (as he soon became known), Jackson and McGarry?that is usually cited as the original foursome.

McGarry did not stay long, however, and in 1960 his place was taken by Chris Crummey (who later changed his name to Curtis). Later that year Big Ron had a successful audition with Mecca and became a ballroom singer. He was replaced by Billy Beck, who changed his name to Johnny Sandon. The band had regular bookings at Liverpool's Iron Door Club as Johnny Sandon and the Searchers.

Sandon left the band in late 1961 to join The Remo Four in February 1962. The group settled into a quartet sharing the vocal lead and billed simply as The Searchers. They continued to play at the Iron Door, The Cavern, and other Liverpool clubs. Like many similar acts they would do as many as three shows at different venues in one night. They negotiated a contract with the Star-Club in the St. Pauli district Hamburg for 128 days, with three one-hour performances a night, starting in July 1962.

The band returned to a residence, at the Iron Door Club and it was there that they tape recorded the sessions that led to a recording contract with Pye Records with Tony Hatch as producer.

Hatch played piano on some recordings and wrote "Sugar And Spice"?the band's second number one record?under the pseudonym Fred Nightingale; a secret he kept from the band at the time.

After scoring their monumental hit "Needles And Pins", bassist Tony Jackson went solo and was replaced by Hamburg pal Frank Allen of Cliff Bennett and the Rebel Rousers.

As musical styles evolved, The Searchers could not keep up and as a result, the hits ran out and while they continued to record for Liberty Records and RCA Records, ended up on the British "Chicken in a Basket" circuit although they did score a minor US hit in 1971 with "Desdemona".

The group continued to tour through the 1970s and were rewarded in 1979 when Sire Records signed the band to a multi-record deal. Two albums were released by them, the searchers and Play for Today (retitled Love's Melodies outside the UK). Both records garnered great critical acclaim but did not break into the charts. They did however revitalize the group's career. According to John McNally, the band were ready to head into the studio to record a third album for Sire when they were informed that due to label reorganization, their contract had been dropped.

In 1981, the band signed to PRT Records (formerly Pye, their original label) and began recording an album but only one single, "I Don't Want To Be The One" backed with "Hollywood", saw the light of day at that time. The rest of the tracks would be released as part of 2004's 40th Anniversary collection.

In 1988, cocoNut Records signed The Searchers and the album Hungry Hearts was the result. A very contemporary sounding release, it featured modern sounding remakes of "Needles And Pins" and "Sweets For My Sweets". While the album was not a major hit, it did keep the group in the public eye.

The band continues to tour with Eddie Rothe replacing Adamson on drums and is considered to be one of the most popular 1960s bands on the UK concert circuit.