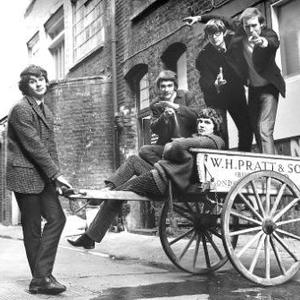 The Zombies were a pop rock/psychedelic rock band that formed in 1961 in St Albans, England and gained their initial reputation playing the Old Verulamians Rugby Club in that town. The group was formed whilst the members, Rod Argent, Paul Atkinson and Hugh Grundy attended St Albans School and Colin Blunstone and Chris White were at St Albans Boys' Grammar School. The Zombies signed to Decca and recorded their first hit, "She's Not There" after winning a beat-group competition sponsored by the London Evening News.

The Zombies signed to Decca and recorded their first hit, "She's Not There" after winning a beat-group competition sponsored by the London Evening News. "She's Not There" was released in mid-1964 and peaked at number 12 in the UK, where it would be their only Top 40 hit. It was first aired in the United States in early August 1964 on New York City rock station WINS by Stan Z. Burns, who debuted the song on his daily noontime "Hot Spot" segment during which new songs were played. The tune began to catch on in early fall and eventually climbed to #2.

In 1991 Blunstone, Grundy and White briefly reunited as The Zombies with guitarist Sebastian Santa Maria and recorded the album New World.

In early 1965, "Tell Her No" became another big seller in the United States but had failed to make the Top 40 in the band's native UK. Subsequent recordings such as "I Love You" (which became a hit for People! in 1968), "Indication", "Whenever You're Ready", and "Is This the Dream" failed to achieve the success of the previous two singles.

Their first LP, Begin Here (1965), was a collection of early singles, half a dozen original songs combined with several R&B covers. The Zombies signed to CBS Records for one final LP in 1967 The resulting album, Odessey and Oracle, was one of the very first to utilize a Mellotron keyboard, as the band's budget did not allow for the hiring of session musicians. The band discovered too late that "odyssey" had been misspelled by the cover designers and were reportedly deeply embarrassed.

By the time Odessey and Oracle was released in April 1968, the band had broken up. The album sold little, and was only released in the US because musician Al Kooper vouched for it. It has since gone on to be recognized as one of the greatest albums of all time, with Rolling Stone ranking it #80 on its 500 Greatest Albums list. An album track called "Time of the Season" was released as a single and eventually (1969) it became a huge nationwide hit (Billboard #3) after a radio DJ discovered it and put it on heavy rotation. Since the group declined to perform, various concocted groups tried to capitalize on the success and falsely toured under the band's name.

Still Got That Hunger

Breathe Out, Breathe In