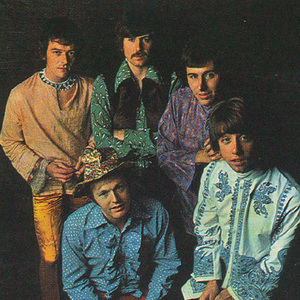 The Hollies are a well-respected British beat and rock and roll band, formed in the early 60s. Initially they had a squeaky-clean image and were famous for their rich vocal harmonies, rivalling those of The Beach Boys. Between 1964 and 1969, only two Hollies songs failed to reach the UK Top 10. Their most famous member was Graham Nash[, who left in 1968 to form the super group Crosby, Stills & Nash. Two of the core members, drummer Bobby Elliott and lead guitarist Tony Hicks, still perform with The Hollies into the new millenium.

Frequent releases during the mid-60s included many cover versions of popular songs, as well as a few group-penned hits and many songs written especially for them by professional songwriters.

Formed in 1962 in Lancashire, England. By 1965 The Hollies were established as one of Britain's pre-eminent singles bands. As part of the British Invasion, they enjoyed huge chart success in many countries in the mid-Sixties, releasing a string of classic harmony-pop hits including Bus Stop I'm Alive, a UK No. 1, I Can't Let Go, Stop Stop Stop, Carrie Anne, On a Carousel, Look Through Any Window, and Jennifer Eccles.

The band are noted for their longevity, with their 2006 tour chalking up 45 years. Despite numerous changes in line-up, Tony Hicks & Bobby Elliott have been with the band almost from its inception.

The legendary, former lead singer Allan Clarke has now left The Hollies (but still very much active in the music scene) was replaced with Carl Wayne, ex lead singer of The Move. The sad news is Carl Wayne has now passed away to that great stage in the sky, God is a lucky guy, he will be entertained greatly. Carl is now replaced by Peter Howarth. Despite the line-up changes throughout the years, the Hollies have always managed to put out great music with the trademark Hollies three part harmony. One of the best and most successful bands from their birth professionally in 1963 to the present day. They are celebrating, this year, their 44th Anniversary of still charming audiences all over the world. Also in today's line up is, Ian Parker on keyboards, Ray Stiles (Ex Mud, remember 'Tiger Feet') on bass guitar and last but not least, long term Alan Coates on guitar and vocals has now been replaced by Steve Lauri.

March 15, 2010 saw the Hollies inducted into the Rock and Roll Hall of Fame.