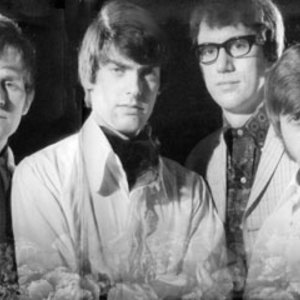 Honeybus were a 1960s pop group formed in April 1967, in London, UK. They were best known for their 1968 UK Top 10 hit single, "I Can't Let Maggie Go". Since their heyday, have often been pigeonholed as a "one-hit wonder", a tag which many say belies the rich legacy of material left behind by the band. The best known line-up consisted of: * Pete Dello ? (vocals, keyboards, guitar) * Ray Cane ? (vocals, bass, keyboards) * Colin Hare ? (rhythm guitar, vocals)

Material was written by the band's main resident composers, Dello and Cane. Critics, amongst them Kenny Everett, compared the band to the Rubber Soul era of Beatles. Yet Honeybus never had the commercial success of many other artists of time, and only once in their history did they connect with the public for a major hit with 1968's "I Can't Let Maggie Go". However, this song was so popular that it earnt the band a cover photo on the popular music magazine Disc and Music Echo, where they posed somewhat appropriately on a Red London Bus.

"I Can't Let Maggie Go" reached Number 8 in the UK Singles Chart, staying in the Top 40 for over two months, but any chance of future success was shattered when Dello resigned during the single's chart run. He had been willing to play live on radio and television appearances or a special concert showcase, but abhorred the live scene and the idea of touring America. Jim Kelly came in on guitar and vocals, whilst Cane, whose talents and instincts were a close match for Dello's, took over most of the songwriting.

They scored a minor success with "She Sold Blackpool Rock", but the group never really recovered and they disbanded late in 1969.

The band's work is arguably best evaluated by listening to their 1970 album The Honeybus Story, which, without an active band to promote it, sank without a trace. Dello and Hare went on to record critically acclaimed solo albums, but without any commercial success. A further surprise for fans came when the Dello line-up got back together in 1971 to record a new body of songs for the Bell Records label and a complete LP (Recital - unreleased 1973) for British Warner Brothers, which was never issued commercially, although some promotional copies were issued to music business insiders and are now highly collectable.

Eventually, everybody except Kircher and Hare gave up music as a profession. Dello now owns several car showrooms in Britain. Jim Kelly died in 1995.