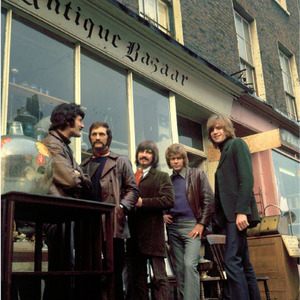 The Moody Blues are an English rock band formed in May 1964. Among their innovations was the fusing of rock with classical music, most notably in their 1967 album Days of Future Passed. During their career the band has sold more than 70 million albums worldwide and been awarded 14 platinum and gold discs. As of 2012 they remain active, with one member from the original band from 1964 and two more from the 1967 lineup.

The first gigs by the Moody Blues were sponsored by Birmingham's M&B brewery and, consequently, the band briefly took the name the MB5, changing it soon after to the Moody Blues. The band originally featured Denny Laine as lead singer and Clint Warwick on bass guitar, Ray Thomas on Flute, and Graeme Edge on drums. Mike Pinder was the original keyboardist.Go Now made No. 1 in January 1965. However, their subsequent release failed to match this success and Laine and Warwick left the band.

In late 1966, Laine was replaced on lead guitar and vocals by Swindon-born Justin Hayward and Warwick was replaced on bass guitar and vocals by fellow Brummie, John Lodge. Both assumed the roles of main songwriters for the band and it was then that they were transformed from a mainly covers band to a unique combination of classical, symphonic, progressive and psychedelic rock.

Whilst the debut album by the new line-up, 'Days Of Future Passed', featured a full orchestra conducted by Peter Knight, subsequent recordings were performed entirely by band members on a wide variety of instruments - including the distinctive sounds of Mike Pinder on the mellotron.

Between 1967 and 1972, the band released seven multi-million selling studio albums and performed worldwide sell-out tours. After a hiatus of five years, during which most of the members released solo and duo projects (most notably the album 'Blue Jays' and the single 'Blue Guitar' by Justin Hayward and John Lodge in 1975; the album 'Songwriter' and the single 'One Lonely Room' by Justin Hayward in 1977; the album 'Natural Avenue' by John Lodge in 1977; and Justin Hayward's collaboration with Jeff Wayne on the 1978 concept album 'The War of the Worlds' and the singles taken from it, 'Forever Autumn' and 'The Eve of the War'), the band reformed and released the album 'Octave' and the singles 'Stepping in a Slide Zone' and 'Driftwood'. Keyboard player, Mike Pinder, left the band soon after recording of 'Octave' was complete and was replaced by Patrick Moraz, formerly of Yes. The band embarked on a world "comeback" tour that took the best part of a year, culminating in a show at Wembley in November 1979.

There have followed a further seven studio albums, the most recent being 'December' in 2003, along with numerous tours, several popular live albums and DVDs, and contributions to film soundtracks.

Their 1981 album, 'Long Distance Voyager' (the first with Patrick Moraz on keyboards), saw them back at the No. 1 spot. The videos accompanying their 1986 releases 'Your Wildest Dreams' and 'The Other Side of Life' (from the album 'The Other Side of Life') and 1988's 'I Know You're Out There Somewhere' (from the album 'Sur la Mer') introduced the band to a new generation and ensured that their popularity endured beyond their legions of loyal fans from their early days.

Following the departure of Moraz in 1990 and vocalist/flutist Ray Thomas in 2002, the remaining members of the second incarnation - Justin Hayward, John Lodge and Graeme Edge - have continued to tour and record with regular named keyboard players, including Bias Boshell and Paul Bliss, and recent flute accompaniment in the form of the established Norda Mullen.

In April 2006, Justin Hayward took part in the UK live tour of "Jeff Wayne's Musical Version of HG Well's 'The War of the Worlds'", reprising his role as the sung thoughts of the journalist and performing his hits, 'Forever Autumn' and 'The Eve of the War'. The show met with outstanding reviews from audiences and critics alike, and an international tour of the show is currently underway (July 2007).

In Search Of The Lost Chord (50Th Anniversary Edition) CD3

In Search Of The Lost Chord (50Th Anniversary Edition) CD2

In Search Of The Lost Chord (50Th Anniversary Edition) CD1