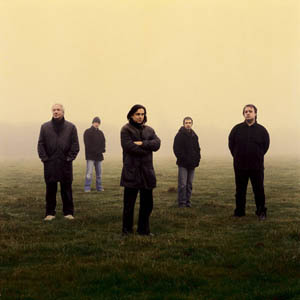 Marillion are a rock band formed in Aylesbury, England . Their 30-year career is marked by two distinctive phases; the early years fronted by Fish which saw their greatest commercial success, and much longer period fronted by Steve Hogarth in which the band have constantly re-invented themselves so as to continue to be relevant into the 21st century. The Fish era is often categorized as neo-progressive.

The Fish era is often categorized as neo-progressive. They originally started as "Silmarillion" (from Tolkien's book) with heavy influences from classic Genesis but went on to develop their own distinctive sound. The band was formed in 1979 by Mick Pointer (drums), Steve Rothery (guitar), Doug 'Rastus' Irvine (bass), and others, soon adding vocalist Fish (real name Derek W. Dick), Diz Minitt (bass), and Brian Jelliman. By the time of their first album, 1983's Script For A Jester's Tear, the bass position had been taken over by Pete Trewavas and keyboards by Mark Kelly.

When Fish left the band in 1988 after four albums he was replaced by Steve Hogarth. A former member of The Europeans and some-time collaborator with The The and Julian Cope, Hogarth brought a new energy to the band.

Across a further ten albums, Hogarth ? along with existing members Rothery, Kelly, Trewavas, and Mosley ? have reinvigorated and constantly redefined Marillion's sound. They forged into new musical territories with a succession of inventive, emotional albums, displaying little regard to the vagaries of hit charts or radio playlists.

After the release of 1999's marillion.com the band freed themselves from record company pressure once and for all by launching their own record label, the Intact imprint.

Thanks to their pioneering embrace of the Internet through their website http://marillion.com, Marillion have developed a unique and intimate relationship with their fans. From sponsoring entire tours of the USA to funding the recording of recent albums, Marillion's global fan-base is unique in its affection and dedication. As a result, such passionate, wholesale support has allowed Marillion to step outside of the conventional music industry and find their own path.

In 2001 Anoraknophobia saw Marillion take the groundbreaking step of asking fans to pre-order an album 12 months before release. An amazing 12,000 people signed up, helping to finance the recording. The band once again took pre-orders for the 2004 release Marbles, but this time the money was channelled into a campaign fund to promote its launch. The success of singles Don't Hurt Yourself and You're Gone ? the latter making it all the way to number 7 ? vindicated the band's independent strategy.

Their 2007 album Somewhere Else reached number 24 in the UK album chart with their most recent single Thankyou Whoever You Are hitting the UK singles chart at number 15. The band shows no signs of fading away after more than 25 years of activity.

Their 15th album, "Happiness is the road", was physically released in October 2008 but was originally available exclusively from the band's website. It was released with little promotion and a deluxe pre-order package was made available as with Marbles. 'Happiness is the Road' is the second studio double album of a long career (2004's Marbles was the other). A UK and European tour followed the album's release, and the band is taking special effort to record every show in the "Happiness on the Road" tour, making the recordings available from the band's website.

With Friends At St David's