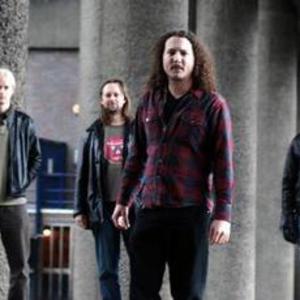 Haken are arguably the most exciting sound to emerge from the modern progressive movement. Formed in 2007, Haken is a virtuoso progressive rock / metal band from London, England, comprising some of the country's finest young musicians. Featured in the band are members of To-Mera and Linearsphere and Anchorhead. In July 2007, Haken showcased their music for the very first time to a packed out London bar with a great response, followed the next week by a sold out show at The Peel in Kingston.

In July 2007, Haken showcased their music for the very first time to a packed out London bar with a great response, followed the next week by a sold out show at The Peel in Kingston. Within months of this double-debut performance, Haken were billed in support of Riverside (Inside Out) at Camden's prestigious Underworld. Haken continued performing sets to packed houses throughout London and on UK tours in support of cult metal bands King's X (Inside Out), Bigelf (Custard Records), and To-Mera.

They continue to extend their fan base having played to date: The Camden Underworld, The Electric Ballroom, The Nottingham Rescue Rooms, The Wulfrun Halls, The Bull and Gate, The Manchester Academy, The House of Progression, ProgPower Europe - Baarlo, The Netherlands, Summers End, The Camden Barfly, The Purple Turtle, The Brighton Freebutt, The Star, The Flag, The Peel, Leonards.........more to come.........

One of HAKEN's demo tracks was featured on the cover CD for the second issue of 'CLASSIC ROCK PRESENTS PROG' magazine in 2009.

AQUARIUS is HAKEN's debut release - a 72 minute, larger than life conceptual sci-fi/fantasy work filled with bombastic keyboard flourishes, stunning vocals, and lethal guitarwork. The album was recorded in Germany at Spacelab Studios (Delain, Everon, Wolverine) and mastered in Germany at Eroc's Mastering Ranch. The stunning artwork is by Dennis Sibeijn at Damn Engine created to tie in with the Aquarius story.

Early on in the writing process for the album, HAKEN were contacted by the LASER'S EDGE Group who later signed the band to their specialist progressive metal label SENSORY RECORDS, through which AQUARIUS was released worldwide in MARCH 2010 gaining many positive and exciting reviews, notably in Classic Rock Presents Prog and on PROG ARCHIVES

Rob Kachluba - Hell Hound.
'I am totally blown away. Haken is the best thing to happen to progressive metal in many, many years. Hailing from England, this relatively young band has unleashed a masterpiece.'

In their brief existence, HAKEN have become highly respected within the British metal and progressive communities. Their unique and imaginative genre-bending approach to music has garnered praise from all corners of the globe and they are becoming more widely known in The States and across Europe with interest beginning to develop in Japan and Australia..

HAKEN continued to perform exciting live shows, sharing the stage with THE DIABLO SWING ORCHESTRA at The Underworld and introducing their music to a wider audience at PROGPOWER EUROPE 2010 with SHADOW GALLERY and at SUMMER'S END 2010 with KARMAKANIC and AGENTS of MERCY.

They played a high profile show with the legendary FREAK KITCHEN at the London Underworld in November 2011.

They played the new UK Prog Metal FUSED FESTIVAL with Vanden Plas and Threshold in April 2011 and a sell out warm up HEADLINE show for this festival at the HOUSE of PROGRESSION in Kingston Upon Thames with To-Mera - 25 March.

HAKEN played at MONKEYFEST 2011 in the UK on July 2_2011 with Guthrie Govan, Rob Chapman and Andy James.

HAKEN played on the same bill as Dream Theater at Loreley in Germany at NIGHT of the PROG VI on July 9 - 2011, along with Anathema, Vanden Plas and IQ. There were lots of HAKEN T-shirts in the front and they had the best show so far to a generous and enthusiastic crowd, culminating with a standing ovation.. A beautiful weekend of great friends and great progressive music.

HAKEN made their highly well received USA debut at CENTER STAGE in Atlanta as part of the prestigious PROGPOWER USA XII in September 2011 alongside some legendary bands including Therion, Sanctuary, Vanden Plas, Evergrey, Forbidden, Labyrinthe and Ihsahn.

Haken are billed to play a great prog show at THE ASSEMBLY in Leamington Spa on Nov 27, 2011, with Arena and Touchstone.

AQUARIUS continues to take the progmetal world community by storm -
inspiring passionate debate on the established prog and metal forums around the World and was progarchives no1 album of 2010.

VISIONS, their second concept album, will be released on October 24th 2011 on The Sensory Label [Laser's Edge]. They have aimed to raise the bar with their composition and their playing and move up to the next level. Pre release copies sold exculsively at PROGPOWER USA XII in Atlanta and GENERATION PROG in Nuremberg ahve already received critical claim and placed them at the top of The Progarchives 2011 a prog album chart

A track from VISIONS will be on the free CD in issue 21 of Classic Rock presents Prog 21 out in late November 2011, along with an interview and album review.

HAKEN has an official website THE POINT OF NO RETURN - A big appreciative HAKEN thank you goes out to Richard Jouen for designing and running this site so passionately and professionally: