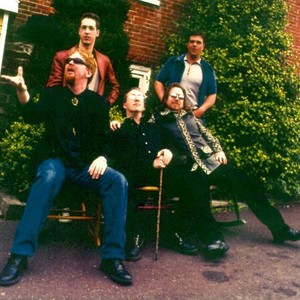 echolyn (which the band itself always writes with a lowercase "e") was formed in 1989 when guitarist Brett Kull and drummer Paul Ramsey, members of a recently split cover band called Narcissus, joined with keyboardist Chris Buzby to form a new band to focus on original songs. They were soon joined by fellow Narcissus veteran Ray Weston on vocals and bassist Jesse Reyes, and quickly began playing live and recording their eponymous debut album, which was released in 1991. During the recording of that album, Reyes was replaced on bass by Tom Hyatt.

With this lineup, echolyn recorded a second album, Suffocating the Bloom, and a 4-song EP, ...and every blossom, and with these releases attracted the attention of Sony Music. In 1993, echolyn was signed to a multi-album deal on Sony's Epic Records label, and their major-label debut, As the World, was released in March 1995.

However, the band and the label did not agree on the band's musical direction, and the band was forced to promote As the World without the support of Sony. Disillusioned, the band split up, releasing a posthumous album of demos and live tracks in 1996 called When the Sweet Turns Sour.

Echolyn reformed, without Hyatt, in the spring of 2000, with Weston picking up bass duties and new member Jordan Perlson, a Berklee College of Music graduate and former student of Buzby, supplementing Ramsey on drums and percussion. This lineup produced the 2000 album Cowboy Poems Free, a loose concept album centering on Americana, and the 2002 album mei, which contains only a single, 50-minute-long track.

After playing as a guest with the band in 2002 and early 2003, Tom Hyatt officially rejoined echolyn later that year. The first album from the fully reformed lineup was The End Is Beautiful, released in September 2005.

While the band's style has varied over the years, those influences have been consistently reflected in their music. Intricate guitar leads, unorthodox harmonic structures influenced by modern classical music, and complex contrapuntal vocal passages have remained significant aspects of echolyn's musical sound.

The albums they recorded before their 1996 breakup sounded more like "classic" progressive rock, with layered keyboards and extended arrangements. Following their reformation, they have streamlined their style significantly, emphasizing strong, tightly constructed songwriting and more prominent rhythmic grooves, while maintaining much of the subtle sophistication that has caused their music to be labeled "progressive."

I Heard You Listening

The End Is Beautiful

When The Sweet Turns Sour