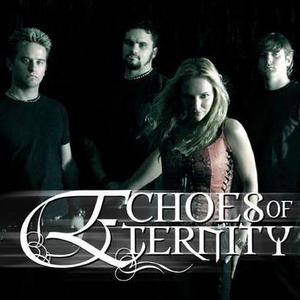 ECHOES OF ETERNITY is a band that performs symphonic metal. The band was founded in 2005 in Southern California. They released their debut album The Forgotten Goddess in 2007, which recieved mixed reviews from critics, some citing the music as ''high-strung, ProTooled, synthetic, with a stiff nature to the riffs and the drumming'' while others claimed there is ''beautiful melodies galore, backed by a start-stop machine gun double bass attack and a classic metal guitar sound.''

The band's second album, As Shadows Burn, was released in September 2009 and has a somewhat different feel from the first. Gone are the synthetic effects layered on the vocal tracks and the slower, more gothic tracks that one can find on the Forgotten Goddess. Instead, we have something influence by power and progressive metal sounds.