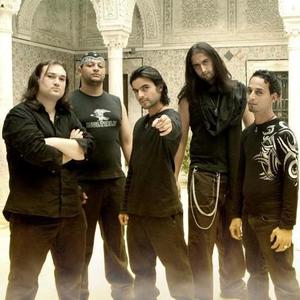 Myrath (which means Legacy) was formed in early 2001 under the name of XTAZY by guitarist Malek Ben Arbia, just 13 years old at the time, with two of his childhood friends Fahmi Chakroun (drums) and Oualid Issaoui (guitar). The line up was shortly after completed by Zaher Ben Hamoudia (bass) and Tarek Idouani (vocals). Myrath first started playing in local concerts a variety of songs of different styles of their favorite bands which goes from blues to heavy metal to death metal.

The line up was shortly after completed by Zaher Ben Hamoudia (bass) and Tarek Idouani (vocals).

Myrath first started playing in local concerts a variety of songs of different styles of their favorite bands which goes from blues to heavy metal to death metal.
In 2003 Elyes Bouchoucha (keyboards and vocals) who just graduated from Tunis conservatory joined the band in replacements of Tarek Idouani while Oualid Issaoui (guitar) quit the band.
With this new line up Myrath got into progressive metal and for almost 2 years they played in several concerts exclusively songs of the progressive metal band Symphony X which was their favorite band of that time and still is.
After several years of playing music written by others, Myrath gained enough experience and playing skills to start writing their own. The choice of music they decided to write reflected their oriental origin and their western influence (a combination of progressive, oriental, heavy and melodic).
In the summer of 2004 Fahmi Chakroun (drums) and Zaher Hamoudia (bass) were replaced respectively by Saif Ouhibi and Yassine Belgith in an effort to get musicians fully dedicated to the band.
With this new line up Myrath released their first self produced album ?'Double Face?' on March 2005.
Even though it was a first recording experience, this album (which was released in Tunisia only as the band was not signed yet) did however show encouraging signs of composing skills
In September 2005 Malek Ben Arbia the band founding member and guitarist travelled to Nancy, France to enrol in the famous Guitar school, Music Academy International (M.A.I.) to undergo a one year extensive training course so as to improve his knowledge in music theory and improve and diversify his playing skills.

In March 24th 2006 Myrath opened for Adagio and Robert Plant in the 3rd edition of the Mediterranean guitar festival which gave them the opportunity to meet Adagio band members and mainly their keyboard player Kevin Codfert who happened to be also a sound engineer and a producer.
After graduating from M.A.I. guitarist Malek Ben Arbia returned to Tunisia in late July 2007 with the firm intention to pursue an international music career with Myrath.
To this respect experienced Bass player Anis Jouini joined the band in September 2006 in replacement of Zaher Hamoudia (who replaced for a short period of time Yassine Belgith).
With a line up now consisting of 4 skilled musicians fully dedicated to the band and sharing the same ambition of success, Myrath spent about 3 months writing new songs for the second album.
In December 2006 they recorded the album ?Hope? with Kevin Codfert as sound engineer and producer
This new album was a turning point in Myrath's career as thanks to Kevin's valuable assistance and superb work the band was signed by the French label Brennus Music who released "Hope" in September 2007.
In June 2007 Zaher Zorgati considered by many as the best Metal singer in Tunisia joined Myrath as lead vocals and has made his debut concert in the ?Rock ? Rad?s Festival? on 10 August 2007.

Most critics predicted a bright future for the band as summarized by one of them who wrote "Myrath will probably be the first band from Maghreb which will have a famous international career. This album is one of the best releases of Progressive Metal that I had the chance to listen to lately. Thumb up to Myrath for this exceptional release? this band will become really big and famous you'll see, I will not be wrong".

The success of HOPE contributed to improving the notoriety of Myrath, and paved the way for prestigious European festivals (such as METAL ROCK FESTIVAL - Norway and PROGPOWER-EU ? The Netherlands) to include the band in the lineup of their 2008 edition. Thus on May 2nd 2008 Myrath made an impressive debut live performance outside Tunisia in PROGSUD Festival (Marseille ? France) with talented singer Zaher Zorgati (who joined the band in June 2007) as front man.

Knowing that a follow up album is no easy task in terms of fans expectations Myrath let their inspiration guide them when composing the new album named DESERT CALL, the softer and versatile voice of new singer Zaher Zogati contributed to Myrath finding its own trade mark, a mix of melodic Arabian tunes, and prog-power metal enhanced by a balanced Arabian and western orchestration.

Recorded in November 2008 in Tunis-Tunisia and brilliantly mixed and produced by Kevin Codfert, the album was fully completed. By June 2009 however it was only after several months of negotiations with various labels that Myrath finally signed an exclusive license contract for Europe with the major French labels XIII BIS RECORDS (Sony distribution) and another one for the rest of the world with the prestigious American Label Nightmare Records.

Tales Of The Sand