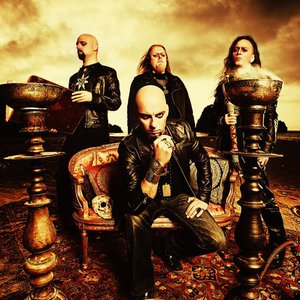 Melechesh is a Middle Eastern black metal band that originated in Jerusalem. Ashmedi started the band as a solo project in 1993. In the following year, guitarist Moloch and drummer Lord Curse were added to the line-up. The band's goal was to create a type of black metal incorporating extensive Middle Eastern influences mainly based on Mesopotamian/Sumerian and occult themes (both musically and lyrically); the band invented the title "Mesopotamian metal" to best describe their type of metal.

The band's release in 1995 of the official demo As Jerusalem Burns... and 7" EP The Siege of Lachish attracted attention from both underground metal fans and local authorities. Melechesh were accused of "Dark Cult activities" by the law enforcement authorities of the city of Jerusalem, especially by a frontpage newspaper article which twisted some facts. The charges were eventually dropped.

In 1996, The band released their debut album As Jerusalem Burns...Al?Intisar on an American black metal record label; then newly recruited bassist Al?Hazred completed the line-up. This marked the band as the first signed Non -Israeli band from the Middle East. And also First international signed metal band from Jerusalem and Bethlehem.

Due to various personal, professional, and demographic reasons the band members had to relocate. 1998 armed with a new promo CD "Mesopotamian Metal" and after a farewell gig in Jerusalem, Israel, Melechesh relocated to France and the Netherlands . Lord Curse remained in Jerusalem and later moved to the USA to continue with his Art studies (and now works for George Lucas' ILM company), hence, the band had to recruit a new drummer. Absu mainman and drummer Proscriptor soon filled the vacant position. From that point on, Melechesh have released two full-length albums: Djinn (2001), dealing with Mesopotamian mythology, and Sphynx (2003), dealing with Mesopotamian/Sumerian mythology while always keeping the dark and Near Eastern occult themes close to their hearts. The band recorded their fourth and highly acclaimed album Emissaries which is available in Europe (Osmose Productions) and by The End Records in the United States and Canada . Meanwhile, Xul has replaced Proscriptor as the band's fulltime drummer. A documentary was begun filming the founder, about his plight to create the band. Despite the first director leaving the film after losing all footage he did in Jerusalem another director took over and the project is still on track. Ashmedi's biographical articles can be found on several reputable websites and printed magazines around the world, such as the magazines Decibel and Legacy. Meanwhile since the release of the highly acclaimed The Epigenesis, Melechesh have been continuously touring around the world to further promote the album.

The name Melechesh consists of two words, melech (meaning king), and esh (meaning fire) of Aramaic and classic Hebraic origins, a combination which has been originated by the band. The ch is pronounced like the Scottish ch as in the word LOCH or Greek X . Another accepted and common pronunciation is MeleKesh.

The band started their career in Jerusalem (and Bethlehem) and operated from there between 1993?1998; however, they have resided mainly in Amsterdam since 1998 for several personal, professional and demographic reasons.

Mystics Of The Pillar II

The Siege Of Lachish (Single)