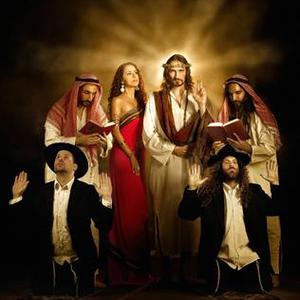 Orphaned Land is a doom/death band at its core, but they are highly influenced by the folk music and tradition of the Oriental Jews (Mizra?im), making their sound much more progressive than typical doom/death bands. Their album Sahara (1994) was the first to include a combination of death metal and traditional oriental music. In their second album El Norra Alila (1996), Orphaned Land elaborated the combination of metal and oriental music, including the addition of song with traditional oriental Jewish piyyut and Arab melodies. This album conveyed a message of co-existence between Jews and Muslims. Their third album, Mabool (the Hebrew name for the Deluge, depicted in the Bible and Noah's story), 2004, was worked for seven years and takes the combination of doom/death metal, oriental music and biblical issues to a new level. The album tells the story of the seventh son of God (who was divided into three, each one symbolizing one monotheistic religion) which try to warn humanity from a coming flood (deluge) as punishment for their sins. Musically, the album contains oriental instruments, two choruses, traditional Yemenite chants sung by Shlomit Levi and quotes of Biblical verses from the story of the Deluge, read by Kobi Farhi, Orphaned Land's vocalist and one of its founders. The level of musical competency displayed in the heavy layering and orchestration combined with the more story-driven, conceptual nature of the album's lyrics as a whole lend a very strong progressive feel to the work.

The Road To Or Shalem

Mabool: the Story of the Three Sons of Seven CD2

Mabool: the Story of the Three Sons of Seven CD1