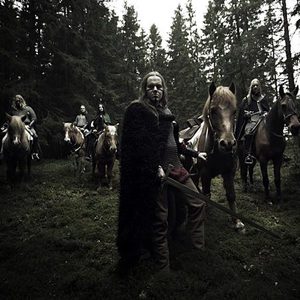 Ensiferum (Latin ?nsiferum (neuter adjective) meaning "sword bearer") is a folk metal band from Helsinki, Finland. In 1995 Markus Toivonen played guitar with some friends in a band called ?Dark Reflections?, which played mainly covers of certain heavy metal bands including Megadeth, Pantera and many others. Later on, Markus felt that the band in which he was playing offered him very little inspiration and wanted to play something different. Markus was hugely inspired by folk music and also found himself fascinated with melodic death metal bands like Amorphis and Dark Tranquillity.

In 1995 Markus Toivonen played guitar with some friends in a band called ?Dark Reflections?, which played mainly covers of certain heavy metal bands including Megadeth, Pantera and many others. Later on, Markus felt that the band in which he was playing offered him very little inspiration and wanted to play something different. Markus was hugely inspired by folk music and also found himself fascinated with melodic death metal bands like Amorphis and Dark Tranquillity. Then one day Markus asked the band's drummer, Kimmo Miettinen, if he wanted to play heroic folk 'death' metal with him. Kimmo agreed. Next Markus and Kimmo asked their friend Sauli Savolainen, if he wanted to come and play the bass. Fortunately, he said yes. Now they had a band. Only trouble was that the band had no name at the time. One day Markus was visiting Sauli at his home, when he found a book; a Latin Dictionary. Markus casually opened the book. And from the first randomly picked page he glanced at a word. Ensiferum. Markus found the word fascinating and the translation "sword-bearing" excited him.

In year 1996 Ensiferum started its training in January 1996 at the Pasila Youthcenter in Helsinki (the same place their earlier band, Dark Reflections, had their rehearsals). Markus begun writing songs in 1995, which he finished in 1996. The songs were ?Knighthood?, ?Old Man (V?in?m?inen)? and ?Frost?. Later in the same year, Markus convinced Jari M?enp?? (at the time a member of the band Immemorial, and an experienced solo artist) to join his band as a singer and second guitarist. Jari came aboard with some great skills and excellent musical ideas. Thus the band was no longer a trio, but a quartet. Jari proved to be a skillful lyricist and wrote the lyrics to ?Old Man?. The two other songs required no new lyrics, because Markus had done the original lyrics for ?Knighthood? and Sauli for ?Frost?. So Jari just improved them. Ensiferum had their first concert at Pasila Youthcenter in December 1996. Ironically, they performed just one song, ?Old Man?, which was the only song with finished lyrics.

1997 Jari joined the army in January and the band's progress was halted. The other members used this spare time to improve their playing skills. Ensiferum had two unofficial gigs in Pasila (one in the Youthcenter and one outside of it) with a strange line-up?
Jari finished his military service in the fall of 1997 and Ensiferum started training heavily for the first demo, which was recorded at Kivi-Studios in November. The demo included three songs, ?Frost?, ?Old Man? and ?Knighthood?, and spread almost 300 copies in the following year.

1998 After the release of the demo Ensiferum did two more concerts in Pasila. New songs were finished, including ?Little Dreamer (V?in?m?inen II)?. But Ensiferum had to take a little breather. Things didn't get any easier because Kimmo Miettinen left to join the band ArthemesiA, and Sauli Savolainen concentrated on his job and school. That year Oliver Fokin had quit playing drums in ArthemesiA and had a few short jamming sessions with Markus in an old bomb shelter in Munkkiniemi, Helsinki. One thing led to another and Oliver agreed to play drums in the band. Essentially, Ensiferum and ArthemesiA switched drummers. Around the same time Sauli was fresh out of the enthusiasm towards Ensiferum and was replaced by Kimmo Miettinen's little brother, Jukka-Pekka Miettinen. Funnily, at the time he started to play bass in Ensiferum he was only fourteen years old. Now there was a new line-up ready to face the challenges of the second demo. And they had a new training facility: the bomb shelter in Munkkiniemi.

1999 The second demo was recorded in January 1999 at MD-Studios. The demo included 4 songs: ?The Dreamer's Prelude?, ?Little Dreamer (V?in?m?inen II)?, ?Warrior's Quest? and ?White Storm?. The second demo was technically evolved and although it didn't score a record deal for Ensiferum, it gave them confidence. They gained more experience in a local band contest and after that they started to record their third and final demo in November 1999 once again at MD-Studios with the help of Janne Joutsenniemi (a member of Stone and Sub-Urban Tribe) who recorded and mixed the demo in a very short studio session. The demo included 5 songs: ?Intro?, ?Hero In A Dream?, ?Eternal Wait?, ?Battle Song? and a bonus song ?Guardians Of Fate?, which was recorded at Jari's home with a drum machine. ?Eternal Wait? had a guest female vocalist Johanna Vakkuri, a friend of the band. The demo was released with a new band logo, which was designed and conceived by Tuomas Tahvanainen, the designer of the previous logos.

2000 The third demo had great reviews and was recognized as on of the top demos of the month by several different publishers. It also got the eagerly awaited attention of the record labels. Once Spinefarm, a record company, got hold of the demo they contacted Ensiferum immediately and started negotiating about the possibility of a record deal. In the meantime, Ensiferum participated in a local band contest and was among the top finalists of that year. Roughly the same time a record deal was finally made with Spinefarm. Ensiferum recorded their debut album in November 2000 at Sundi-Coop Studios in Savonlinna with Tuomo Valtonen (studio engineerer). The album featured such guest musicians as Trollhorn (keyboards), Johanna Vakkuri (guest female vocals) and Marita Toivonen (kantele).

In the spring of 2001 the debut album was mixed by Tuomo Valtonen in his studio. Tuomo Valtonen made the record edgy, as he always does. At similar times Ensiferum had a new addition to its line-up: a keyboard player. Meiju Enho joined Ensiferum and so the band became a quintet. Debut album ?Ensiferum? was released in July 2001 and the feedback was tremendously positive.

Between years 2003 and 2004 to record "Iron" Ensiferum traveled all the way to Copenhagen's Sweet Silence studios in the summer of 2003. The reason for choosing a foreign studio was the studio?s owner, the famed producer Flemming Rasmussen, who has in the past recorded and produced such famed albums as Metallica?s "Master of Puppets" and "Ride the Lightning". "Iron" was then recorded, produced and mixed by Rasmussen.
After the recordings Ensiferum announced with a sad heart that their singer/guitarist Jari M?enp?? had made the decision of leaving the band in order to focus on his new project, Wintersun. The search for a replacement was started immediately due to the band?s busy touring schedule, and soon a new singer was found in the form of Norther?s lead singer Petri Lindroos. Soon after, both Jukka-Pekka Miettinen and Oliver Fokin left the band as well, leaving Markus the only member from the original line-up. They were replaced by bassist Sami Hinkka (previously a member of Finnish melodic death/doom band Rapture ) and drummer Janne Parviainen of Sinergy and Barathrum fame.


2006-2007 Understandably, the fans didn't expect Ensiferum to be able to keep up to the standard they themselves created, but the DVD marking Ensiferum's 10th anniversary showed great promise for the future, and the new album, "Victory Songs", was generally well received. As was the single "One More Magic Potion" released earlier in 2007. This single included the new song One More Magic Potion, and a cover from Uriah Heep, Lady In Black. The sound remained mostly unchanged, though the new vocals are obviously different and the overall sound is more aggressive.

Unexpectedly a Russia-based Fan Club presented Ensiferum with an original present: a star in the Ursa Minor constellation has been baptized with the band's name. The coordinates of the Ensiferum star are as follows:

2007
After being with the band for almost 6 years, Meiju Enho decided to leave the band.
You can read her statement on the Ensiferum website here.
Ensiferum states on their website that:
"Emmi Silvennoinen from the band Exsecratus has been substituting Meiju from the beginning of this year (2007) and continues to act as the live/session keyboard player for Ensiferum until further notice."

Ensiferum headlined the Paganfest tour in Europe and North America in 2008. Others playing the tour included T?r and Eluveitie, with Moonsorrow and Korpiklaani also joining them on the European part of the tour, and Turisas in North America. They also supported Megadeth on the opening night of their United Abominations ? Tour of Duty European tour. Ensiferum also supported Amon Amarth on their North American Twilight of the Thunder God tour.

In the first half of 2009, Ensiferum performed at a string of festivals including Frostrock in Belgium, Finnish Metal Expo and Tuska Open Air in Finland, Winterfire, Rocktower, Legacy and Rock am H?rtsfeldsee in Germany, Summer Nights in Austria, and Z7 Metal Dayz in Switzerland. In June and July they toured North America as part of the Summer Slaughter Tour with Necrophagist, Darkest Hour, Suffocation, Blackguard, Dying Fetus, Beneath the Massacre, Origin, and Winds of Plague. In August they will perform at the Global East festival in Ukraine, Ankkarock and Jurassic Rock in Finland, and Let's Open Air in Turkey.

Ensiferum released their fourth studio album, From Afar, on September 9, 2009 on Spinefarm Records. The album was produced by Nightwish producer Tero Kinnunen and Victory Songs producer Janne Joutsenniemi, and it was mixed by producer Hiili Hiilesmaa. The limited edition of the album includes a cover of Swedish folk rock group Nordman. Following the release, the group will embark on a European tour with Estonian folk metal band Metsat?ll and Finnish melodic death metal band Tracedawn. In October they will also perform at Hellflame Festival ? The South Side of Hell and Devil's Revenge festival in Germany, and Tatto the Mind in France. Ensiferum will perform on the second day of the Screamfest Festival in Sydney, Australia, on New Years Day 2010. In November/December 2009 they will go on tour in North America with Hypocrisy, Ex Deo, and Blackguard.