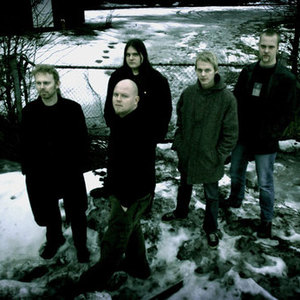 Green Carnation are from Kristiansand, Norway. They formed in 1990 as a death-metal act, but did not release their first album until 2000. This is because shortly after having formed as Green Carnation, main composer Tchort left the band to join Emperor. The rest of the band continued/restarted under a new name: In The Woods.... Tchort decided to restart the band after In the Woods... disbanded, including some old In the Woods... members back into the band.

Their style is most often described as progressive doom metal, with avant garde elements, though their more recent material has been tending away from the 'doom' side. This is perhaps best exemplified by their latest album, The Acoustic Verses, an all-acoustic album almost entirely devoid of the doom metal sound of their previous work. However, in the inlay to The Acoustic Verses, main man Tchort stated that the band is in the process of producing a Doom album much in the vein of the early work. This will be part two of a three part ?doom trilogy? that includes Light of Day, Day of Darkness.

Lyrically they are themed towards life and death, God and the questioning of religion, love and betrayal.

Green Carnation is currently on hold due to financial and record label problems. Although Tchort will continue to write for the project, there will be no more live activity from the band since he disbanded the latest lineup.

The Burden Is Mine... Alone

A Blessing In Disguise

Light Of Day, Day Of Darkness

Journey To The End Of The Night