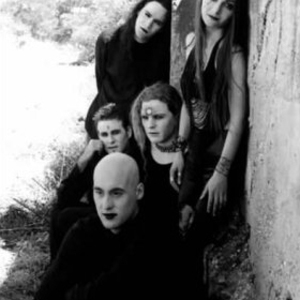 Virgin Black is a gothic doom metal band formed in Adelaide, Australia in 1993. Virgin Black currently consists of the founding members and main songwriters Samantha Escarbe (lead guitar, cello) and Rowan London (keyboard, vocals), with Grayh (bass) and Luke Faz (drums) joining in 2007. The group explains the meaning of its name as "the juxtaposition of purity and humanity's darkness". After the release of a self-titled demo album in 1996, the group began gaining international recognition with 1998's "Trance" EP, signing with The End Records a year later.

After the release of a self-titled demo album in 1996, the group began gaining international recognition with 1998's "Trance" EP, signing with The End Records a year later.

Boasting a complex cinematic sound both gothic and metallic in nature, their debut album "Sombre Romantic" followed in 2000 and saw their core lineup augmented by choirs and string sections in the studio, the better to embellish their grandiose mood metal.

The second album "Elegant...And Dying" (2003) has a sad, epic but romantic sound. The extremely emotional arrangements are further enhanced by Rowan London's unique mournful yet poetic singing style. The songs are presented with numerous angles and at times coming out as soundtrack scores, at others as classical compositions or even as subtle weeping lullabies that make the music as dynamic as it is dark and passionate!

On March 10, 2006, The End Records announced in a press release that Virgin Black will be releasing three albums. The trio of albums is collectively titled "Requiem". First, "Requiem - Pianissimo" is a strictly classically-oriented album featuring instrumentation from the Adelaide Symphony Orchestra, choral singing, and solo singers. Second, "Requiem - Mezzo Forte" will build on the styles Virgin Black used in their previous albums, with the band and the orchestra complimenting one anothers' sound and given roughly equal prominence. Lastly, "Requiem-Fortissimo" will also feature a classical influence, but it will primarily have a death/doom sound heavier than anything Virgin Black had ever played before.

The centerpiece album, "Requiem - Mezzo Forte", was released in May 2007, coinciding with a show at the Elements of Rock festival in Switzerland followed by "Requiem - Fortissimo" in February 2008. The last in the series, "Requiem - Pianissimo" is soon to be released.