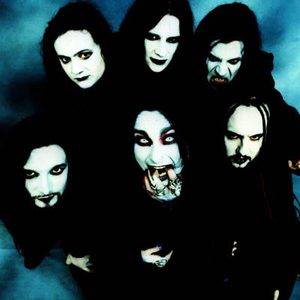 In 1994, Cradle of Filth was signed to Cacophonous Records, on which they released their first album "The Principle of Evil Made Flesh". Cacophonous also pressed the "Vempire or Dark Faerytales in Phallustein" EP in 1996. After this the band were signed to Music For Nations, for whom they produced three of their most prominent full length CD's to date: "Dusk and Her Embrace", "Cruelty And The Beast", and "Midian". The "From The Cradle To Enslave" EP and a compilation dubbed "Bitter Suites To Succubi" also featured many original songs, as well as some covers and re-recordings of old songs. Then in 2003, they signed to Sony and released only one album on this record label, "Damnation And A Day". At the beginning of 2004 however, they left Sony and signed to Roadrunner records, through which they released the albums "Nymphetamine" (2004) and their latest "Thornography" (2006). They also have their own label Abracadaver on which "Bitter Suites To Succubi" was released. They hope to sign bands to this label in the near future. On Sept 27th 2008 Roadrunner Records and Cradle of Filth made available an MP3 download for "Tragic Kingdom" the first sample of the upcoming album "Godspeed on the Devil's Thunder" due to be released in October (available here)

Cradle of Filth is also known for doing covers such as: Hallowed Be Thy Name, Sodomy and Lust, Black Metal, For Those Who Died,No Time to Cry, Bestial Lust (Bitch), Sleepless, Devil Woman, Mr. Crowley, Temptation,Death Comes Ripping and Halloween 2.

Cryptoriana - The Seductiveness Of Decay

Dusk And Her Embrace... The Original Sin

Hammer of the Witches

The Manticore And Other Horrors

The Manticore & Other Horrors