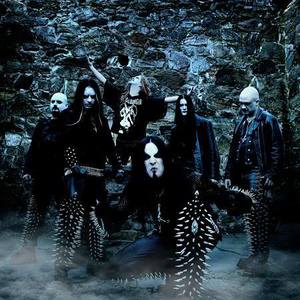 Dimmu Borgir is a symphonic black metal band from Norway. "Dimmu Borgir" means "Dark Cities" or "Dark Fortresses" in Icelandic and Old Norse. The name is derived from a volcanic formation in Iceland, Dimmuborgir. Dimmu Borgir started as a melodic black metal band in 1993. Formed by Shagrath, Silenoz, and Tjodalv, the band released an EP in 1994 entitled Inn i evighetens m?rke ("Into the Darkness of Eternity" in English).

Dimmu Borgir started as a melodic black metal band in 1993. Formed by Shagrath, Silenoz, and Tjodalv, the band released an EP in 1994 entitled Inn i evighetens m?rke ("Into the Darkness of Eternity" in English). This short EP sold out within weeks, and the band followed up with the 1994 full length album For all tid. This album featured musical contributions by members of D?dheimsgard and Ved Buens Ende. The initial lineup consisted of Shagrath playing guitar with Tjodalv on drums and Silenoz backing vocals, however this changed before the release of Stormbl?st (translates to "Storm Blown") on Cacophonous Records in 1996. Stormbl?st received high praise from many melodic black metal fans, and is often regarded as a highlight of the band's career. It is also the last album which features all lyrics written and sung in Norwegian.

After Stormbl?st, Dimmu Borgir's lineup took a sharp turn. Keyboardist Stian Aarstad left the band due to his obligation to serve in the Norwegian army, thus being unable to participate in the 1996 recording of Devil's Path. That period was also marked by the departure of their bassist Brynjard Tristan and the arrival of Nagash. Stian Aarstad returned for the recording of 1997's Enthrone Darkness Triumphant. While on tour to support the album, he had trouble attending rehearsals and being on tour, and was subsequently fired. Enthrone Darkness Triumphant was a huge success for the band, and was their first release signed to Nuclear Blast, a well-known German record label. The album was recorded in the Abyss Studios, owned by Hypocrisy's frontman Peter T?gtgren.

Despite regular video play on MTV2 and Fuse TV that their follow-up album would receive, the band has stated that they are not "commercially-oriented," and instead, they 'simply wish to spread their message to more people'. In 2003, Dimmu Borgir used their major record label financial leverage to record an album titled Death Cult Armageddon. Sections of the album were recorded with the Prague Philharmonic Orchestra to enhance the classical arrangements which have always augmented the band's style. However, in multiple interviews Shagrath mentions the many troubles and shortcomings that came along with using the orchestra from Prague. Two full weeks of studio work were spent cleaning up the mistakes. On their following album the band decided to not use a live orchestra instead leaving the duty mostly to the band's keyboardist, Mustis, in the studio. In 2004, Dimmu Borgir headlined Ozzfest.

In 2005, the band did a complete re-recording of the Stormbl?st album, featuring Hellhammer of Mayhem fame as the session drummer.

Dimmu Borgir's newest album, In Sorte Diaboli, was released April 24, 2007. A special edition version was released in a boxed case with a DVD, backward-printed lyrics, and a mirror. The album artwork was released on February 14, 2007 on a promotional webpage for the album. This album features the drumming of Hellhammer of Mayhem, who had to leave the band in mid tour in 2007 because of a neck injury, resulting in limited movement of his right arm. With the release of this album, Dimmu Borgir became the first black metal band with a number one album in their native country.[1]

In 2008, Silenoz told Metal Hammer magazine that Dimmu Borgir will begin preparation for a tenth studio album in late 2008 for an anticipated mid-2010 release. He also said the band probably will be recording parts of the album with London Philharmonic Orchestra, will be travelling to Egypt and Turkey to create the sound they want to create for this album, and may be produced by Max Cavalera and Fredrik Nordstr?m.

Galder announced in 2008, Dimmu Borgir will be penning a three album deal with Roadrunner Records for releases in the United States, all other releases in the world will continue to be distributed under Nuclear Blast Records.

Forces Of The Northern Night CD2

Forces Of The Northern Night CD1