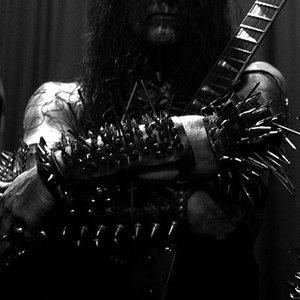 Gorgoroth, meaning ?land of great despair?, is a black metal band from Bergen, named after the dark plains of Mordor in J.R.R.Tolkien's Lord of the Rings. Led by guitarist Infernus (a.k.a. Roger Tiegs), it emerged in 1992 as a trio including vocalist Hat (?Hate' in Norwegian) and drummer Goat Pervertor. The band, based in Hyllestad, debuted on April 28th 1993 with a demo, entitled 'A Sorcery Written In Blood', featuring two tracks ?Sexual Bloodgargling' and ?(Under) The Pagan Megalith' preceded by the intro 'Gathered At Bl?kulla', actually a minute plus of incoherent screaming.

The band, based in Hyllestad, debuted on April 28th 1993 with a demo, entitled 'A Sorcery Written In Blood', featuring two tracks ?Sexual Bloodgargling' and ?(Under) The Pagan Megalith' preceded by the intro 'Gathered At Bl?kulla', actually a minute plus of incoherent screaming. A further cassette, simply entitled 'Promo'94', captured two more songs 'Katharinas Bortgang' and 'Maaneskuggens Slave'. The opening 1994 'Pentagram' album, recorded at Grieghallen Studios with producer Pytten (a.k.a. Eirik Hundvin) for French label Embassy Productions, featured Emperor's Samoth (a.k.a. Tomas Thormods?ter Haugen) on bass, due to the group's original bassist Kjetter being imprisoned for his involvement in the burning of the 800 year old church Skjold Stavkirke.

A deliberate absence of lyrics, artwork and self-aggrandising promotion neatly served to focus purely on the musical content. The antecedent demo tracks all benefited from a re-cut whilst 'Sexual Bloodgargling' would be re-recorded under a revised title of 'Ritual'. 'Pentagram' gave no quarter, Gorgoroth's grim and disciplined machinations unfettered by keyboards, atmospherics, effects. Further contributions also came from Satyricon drummer Frost (a.k.a. Kjetil Haraldstad). Samoth himself was imprisoned for church burning and was duly replaced by Storm.

On the heels of the album Malicious Records issued the 7" red vinyl EP 'The Last Tormentor', two live tracks recorded at The Garage venue in Bergen on May 23rd that year. The June 1996 'Antichrist - True Norwegian Black Metal' album saw a switch to the German imprint Malicious Records, who also re-issued 'Pentagram', and featured second vocalist and guitarist Pest of Obtained Enslavement. Essentially a studio project of Infernus at this juncture, Gorgoroth's second album, clocking in at a rather sparse 25 minutes encompassing just five full tracks and a 20 second intro 'En Stram Lukt av Kristent Blod', found the mainman supplying both guitar and bass for these sessions. For touring in Europe alongside Satyricon and Dissection the band's line-up evolved further to comprise Infernus, ex-Immortal drummer Erik Br?dreskift, as ?Grim', with Aeternus front man Ares on bass.

It all changed again as further line-up changes hit Gorgoroth after the October 1997 'Under The Sign Of Hell' opus, again cut by Pytten at Grieghallen Lydstudio. For this outing the group de-tuned for a more guttural effect but dramatically increased the quota of riffing. Further experimentation resulted in the montage of backward spliced chanting that comprised ?Postludium' and the ponderously uncharacteristic ?The Devil Is Calling'.

Infernus was now joined by guitarist Tormentor (a.k.a. B?llo Heyerdahl), MALIGNENT ETERNAL and Obtained Enslavement bassist T. Reaper (Torgrim), Trelldom vocalist Gaahl with Aeternus and Thy Grief drummer Vrolok (Erik Heggernes). Gorgoroth switched to the aggressive Nuclear Blast label in Germany for the high profile 'Destroyer, or About How To Philosophize With The Hammer' album in May 1998. This outing, mixed by Hypocrisy's Peter T?gtgren, included an unaccredited version of Darkthrone's 'Slottet I Det Fjerne'. Keyboard contributions for these sessions, poignant on the industrialized 'P? Slagmark Langt Mot Nord', came courtesy of Daimonion (a.k.a. Ivar Peersen / / Ivar Bj?rnson) of Borknagar, Bloodflowers, Desekrator, Enslaved, Mysticum, Vulcana, Phobia and Obnoxious repute.

Grim and Infernus would also be operational as members of Borknagar. Infernus featured on the Desekrator ?Metal For Demons' album of 1999. That year Gaahl activated the solo project Sigfader, issuing the 'Sigfaders Hevner' sessions. On October 4th of the same year erstwhile drummer Grim would die, some conjecture being as to whether the cause being the results of drug abuse or suicide.

With King Ov Hell now installed on bass, Gorgoroth's February 2000 album 'Incipit Satan', laid down at Sunlight Studios, was to be the group's most adventurous to date, employing samples, keyboard enhancements and the quite surreal prospect of the 50s styled 'Death Rock' excursion 'When Love Rages Wild in My Heart'. The record saw the drum stool now occupied by former Molested man Erlend 'Sersjant' Erichsen. However, this latest recruit would soon be supplanted by Kvitrafn (Einar Selvik) of Det Hedenske Folk. The instability on the drum stool continued as, scheduled to play South American dates in Mexico and Colombia, Kvitrafn injured his arm. Frost of Satyricon would take the position temporarily.

Gorgoroth rounded off 2001 by donating their take on 'Life Eternal' to a Mayhem tribute compiled by the Avant-garde label. Recording of a new album would be delayed as Gaahl, sentenced to a year in jail, appealed his sentence. Gaahl was sentenced without parole after an episode of extreme violence where he had repeatedly assaulted his victim. In addition, he was ordered to pay 158,000 kronor in punitive damages. By early May it would be revealed that Gaahl was indeed serving time, his sentence scheduled to run until December. During this period Tormentor had left the band.

With Gaahl released from jail, Gorgoroth began laying down vocals at Shimmer Recordings in Bergen for the album 'Twilight of the Idols (In Conspiracy with Satan)'. The original album sleeve was withdrawn in Europe as it depicted the ruins of the 12th century Fantoft stave church burned by Burzum's Count Grishnackh on June 6th 1992. The Gorgoroth duo of Tormentor and Infernus founded the Orcustus band project in league with ex-Enslaved drummer Dirge Rep. This trio debuted with a limited edition 'World Dirt Nap' 7" single.

The band landed themselves in a legal situation due to a supposedly "horrific" live performance in early 2004. Gorgoroth's show on February 1st at the Krakow TV studios in Poland before an invited audience prompted an investigation to determine whether the group had violated the country's laws by having "offended religious beliefs". Gorgoroth filmed the performance for a projected DVD release. The show included two hooded, naked girls and a naked man, all in the crucifixion position and daubed in sheep's blood. On top of this, the scene was made the more gory by having sheep's heads on spikes and sheep entrails strewn about the blood soaked stage. The show's producers claim they were not informed in advance of the nature of the performance. Metal Mind productions had procured the sheep parts and the group had set up the staging behind a curtain.

To add to the band's woes Gaahl faced a court appearance in April for allegedly "ritually" beating a man in February of 2002. According to the alleged victim's statement this abuse of a man in his forties was supposed to have been conducted at a remote farm in Fjaler in Sunnfjord, ending with the vocalist taking blood from the victim and then drinking it. If convicted the singer faced up to nine years in prison. Gaahl's mother, appearing in court in his defence, claimed she found the allegations of blood drinking unbelievable because the singer is "a vegetarian and very fussy about food". Gaahl was sentenced at Sunnfjord court in Forde to 18 months in prison. In addition to the jail term, Gaahl was ordered to pay 75,000 NOK to the victim, plus an additional 29,000 NOK in damages.

Adding to the band's turmoil Gorgoroth parted ways with Nuclear Blast Records in April. Drummer Kvitrafn would also be replaced by the familiar figure of Frost once again. However, after a matter of weeks this union would be broken off, Frost citing conflicting priorities with Satyricon.

In July Gorgoroth wrapped up songwriting sessions for the 'Ad Majorem Sathanas Gloriam' album and set about auditioning drummers. Meantime, Gaahl had appealed his sentence. In September the band recruited drummer Dirge Rep (a.k.a. Per Huseb?) of Orcustus, Enslaved, Emperor and Gehenna repute alongside guitarist Teloch of Orcustus and Nidingr as session musicians for their Mexican and European tours. 1349 acted as support for the latter shows. Once on the road in South America Gorgoroth soon hit the news yet again as a show in San Salvador erupted into a full scale riot.

The French label Season Of Mist licensed the band's early catalogue of albums, 'Pentagram' from 1994, 'Antichrist' of 1996 and 'Under The Sign Of Hell' first issued in 1997 for remastered, digipack release in early 2005. For a new studio album, the group signed to Regain Records. However, on 22nd February Gaahl was sentenced to one year and two months in jail by the Gulating court of appeals. Despite this, Gorgoroth announced European touring, partnered with 1349, for November, concerts on this run being recorded for a live album 'True Norwegian Black Metal'.

The band's woes continued though when in early May guitarist Infernus, along with a friend, was sentenced to three years imprisonment by a Norwegian court. The musician was found guilty of assaulting a 29 year old woman on 27th April 2004 after meeting her at the Garage nightclub in Bergen. Infernus, who appealed the verdict, was also ordered to pay 100,000 NOK in court costs plus an additional 55,000 NOK in punitive damages.

Gorgoroth wrapped up recording of the 'Ad Majorem Sathanas Gloriam' album in early April. That same month brought news that both Gaahl and Dirge Rep had participated in Secht, a Black Metal collective boasting an impressive cast involving Carpathian Forest personnel Vrangsinn, Nattefrost and Nordavind, Nag of Tsjuder, Nocturno Culto from Darkthrone, Apollyon of Aura Noir plus H?st from Ragnarok and Taake amongst others.

In June Gorgoroth parted ways with bassist King ov Hell, issuing a statement "King has recently had problems fronting some of the ideological aspects of his band Gorgoroth's agenda. As a result, it has now been mutually agreed upon that henceforth he is no longer a member of the band."

Gorgoroth was nominated in the "Metal" category at the 35th annual Spellemann awards for the album 'Ad Majorem Sathanas Gloriam' (the Norwegian equivalent to the Grammy Awards).

The dispute over the rights to the name of the black metal band Gorgoroth began in October 2007, when it was announced that vocalist Gaahl and bassist King ov Hell parted ways with founding member Infernus. The dispute was concluded in March 2009, when a court verdict was announced in favour of Infernus, and that Gaahl and King had excluded themselves from Gorgoroth upon parting ways with Infernus.

Twilight Of The Idols

Twilight Of The Idols (In Conspiricy With Satan)

Destroyer, Or About How To Philosophize With The Hammer