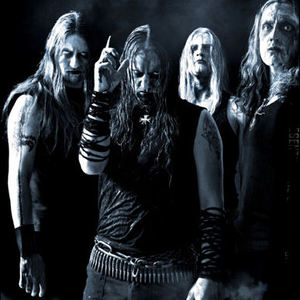 Marduk is a Swedish black metal band. Marduk's predominant lyrical topics are Satanism, anti-Christianity, death, war and the Third Reich. The latter is an addition to their lyrical-conceptual themes stemming from their 1999 release Panzer Division Marduk; it quickly grew among their fans' favorites and so far Marduk have released more and more songs relating to that dark but fascinating chapter of human history such as "The Hangman of Prague" (monicker of Prague "Reichsprotektor", and, by the Way, Leader of the "Sicherheitsdienst", Reinhard Heydrich), "Deathmarch" and others.

Marduk was founded in Norrk?ping, Sweden in 1990 by Morgan Steinmeyer H?kansson. His ultimate goal was to create the most blasphemous and Satanic band ever conceptualized.

In 1991, Marduk released a three song demo entitled "Fuck Me Jesus", which due to its dark and irreverent lyrics was highly received by a cult following.
During 1992, Marduk released their first full-length album "Dark Endless" under the label No Fashion and continued to tour Sweden, augmenting their steadily growing fan base. Marduk switched over to the French label Osmose in 1993 after a dispute with No Fashion. Marduk began to tour throughout the rest of Europe in 1994 and in 1995 had their first gig across the Atlantic in Mexico City. They continued to amass fans and release albums over the next few years, even spearheading the European "Black Metal Assault Tour" in 1998.

In 2000, Marduk founded their own record label, Blooddawn Productions.

In 2004 Marduk released their ninth studio album "Plague Angel" which was a great hit all over Europe and later on in the U.S.A. To celebrate Marduks 15 years anniversary a live album called "Warschau" was released with 17 live tracks from a show in Poland, 2005.

In 2006 a very substantial double DVD, which was called "Blood Puke Salvation", containing 2 concerts professionally filmed in Tilburg (Holland) and Antwerpen (Belgium). Videoclips, photo-gallery, interviews, behind the scenes material and rare handycam footage from the Deathmarch tours of 2004 and 2005.