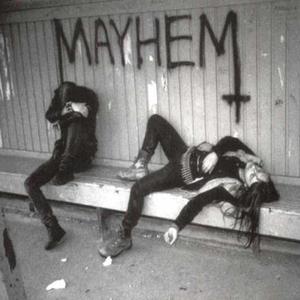 There are at least five artists under this name. Two black metal Bands, a thrash metal band, a hardcore punk Band and an electronica musician with this Nickname: #1) Mayhem is a black metal band from Oslo, Norway which was originally formed in 1983, taking strong influence especially from Hellhammer/Celtic Frost, Venom and from earlier Bathory. The name "Mayhem" was taken from the title of the Venom song "Mayhem with Mercy".

#1) Mayhem is a black metal band from Oslo, Norway which was originally formed in 1983, taking strong influence especially from Hellhammer/Celtic Frost, Venom and from earlier Bathory. The name "Mayhem" was taken from the title of the Venom song "Mayhem with Mercy". Much controversy has surrounded the band regarding various murders, suicides, and other forms of violence. Mayhem have moved through a variety of black metal styles, even going so far as delving into the areas of dark avant-garde industrial and electronica. The group (in its earliest, and most accepted and popular incarnation; 1983-1993) are widely considered to be one of the cornerstone bands in the movement often labelled "the second wave" of black metal. In the years since, their influence has only grown.

The band's initial line-up consisted of Manheim on drums, Necrobutcher on bass guitar, Euronymous on guitar and Messiah on vocals. However, Messiah departed and was replaced by Maniac on vocals; later, Dead and Hellhammer replaced Maniac and Manheim, respectively, to complete what is regarded by many fans as the group's classic lineup.

By April 1991, Dead was dead, aged 22, having suffered a self-inflicted shotgun wound to the head and several lacerations to the wrists, inflicted by a hunting knife he had bought that day. Dead committed suicide in a house he was sharing in Kr?kstad with the other members of the band, and left a note asking that they "Excuse all the blood, Cheers," although other members of the band claimed it was more extensive and also said, "the knife was to dull to finish the job so i had to use the shotgun." Euronymous was first to discover the body, and took a series of polaroids of the corpse, some of which were later used as cover art for the bootleg album, Dawn of the Black Hearts.

According to Occultus, who briefly took a position as vocalist after Dead's suicide: "[Dead] didn't see himself as human; he saw himself as a creature from another world. He said he had many visions that his blood has frozen in his veins, that he was dead. That is the reason he took that name. He knew he would die."

The bullets used had been sent to him by Bergen, Norway, musician Kristian Vikernes (aka Varg Vikernes, Count Grishnackh; ex-Old Funeral, sole member of black metal band Burzum, later convicted murderer of Euronymous). Euronymous was particularly cold and opportunistic about Dead's suicide; in interviews he claimed, speciously, that Dead had killed himself due to the rising popularity of death metal, the Norwegian movement of Black Metal had risen against. According to Hellhammer, Euronymous took pieces of Dead's brain and made a stew, in which he put ham, frozen vegetables, and pepper. "He'd always said he wanted to eat flesh, so he figured this was an easy way." (Euronymous admitted in a later interview that these claims were false, though he had been intending to do so). Euronymous also claimed to have collected and forged fragments of Dead's skull into necklaces, sending pieces to those he felt 'worthy' (amongst those rumoured to be in possession of such pieces are the members of Swedish black metal band Marduk). Hellhammer has said he made a necklace from Dead's skull fragments as well.

As can perhaps be deduced from the band's chaotic past, Mayhem's discography is patchy. There are a staggering number of live releases, demos and bootlegs, and yet there are only a handful of official studio recordings. The band's first official release is the Deathcrush EP, featuring the Euronymous-Necrobutcher-Maniac-Manheim lineup; while its lyrics were rooted in the usual death and thrash metal obsessions of gore and violence, there were also the underpinnings of a darker philosophical vision, influenced in part by Norse mythology, the writings of Friedrich Nietzsche, and Satanism (though Euronymous eschewed the Crowleyan and LeVayan forms for one more directly derived from Christianity). The Deathcrush EP has received quite a lot of praise in the years since its release, but even those who give it its most fervent praise generally agree that it was only a foreshadowing of what was to come.

The band's philosophical vision fully came to fruition after Hellhammer and Dead joined the group. Varg Vikernes, who would later play session bass on De Mysteriis dom Sathanas (intended to be the Latin for "Lord Satan's Secret Rites," but it is grammatically incorrect) after Necrobutcher's departure from the group, has been quoted as saying, "Until Hellhammer and Dead joined the band in 1989, Mayhem was a shitty, 'fun', hobby-band. If you read the lyrics on their Deathcrush album you'll know what I mean." The lineup with Hellhammer and Dead quickly began working on material for a full-length album, the aforementioned De Mysteriis dom Sathanas, but its recording would not be completed until 1993, after the deaths of Dead and Euronymous, and with Hungarian vocalist Attila Csihar, formerly of Tormentor and soon to be of Aborym, on the microphone. The only official performances featuring Dead on vocals are the "Freezing Moon" single and the Live in Leipzig album; there are also several bootlegged rehearsals, including one of his final performance called Out from the Dark.

Court struggles prevented the release of De Mysteriis dom Sathanas for several months after it was completed; Hellhammer was ordered to replace Varg Vikernes' bass parts with his own, but contrary to popular belief, he left them intact and simply lowered them slightly in the mix. He has been quoted as considering it fitting that murderer and victim should play on the same album. De Mysteriis dom Sathanas was finally released in 1994, and has often been cited as one of the greatest black metal albums of all time.

After the release of De Mysteriis, the group disbanded for awhile. However, Hellhammer eventually reformed the group with former vocalist Maniac, former bassist Necrobutcher and a new guitarist named Blasphemer. This incarnation of the group started out relatively close in sound to that of the group's old material on 1997's Wolf's Lair Abyss EP, which is regarded as a masterpiece almost worthy of comparison with De Mysteriis by some fans, but by 2000's Grand Declaration of War they had become a full-fledged avant-garde metal group. This album, which incorporated elements of electronica on one track and dramatic spoken-word passages on several others, confused and alienated many longtime fans while converting some new ones; it also displayed a heavy influence from progressive rock in its concept-based form and the way several tracks featured multiple movements or segued into one another. Grand Declaration was hailed as a masterpiece by some listeners and strongly denounced by others; in terms of how little it bears resemblance to the band's previous output, it can be compared to the left-turns taken by D&oslash;dheimsgard (666 International), Ulver (Themes from William Blake...) and Arcturus (La Masquerade Infernale), amongst others, although, unlike some of those albums, it remains firmly rooted in black metal territory.

2004's Chimera was a more conventional affair, although it still incorporates progressive elements on tracks like "Slaughter of Dreams." It was embraced by many of the fans who denounced Grand Declaration of War. After Chimera was released, Maniac was fired from the band, allegedly due to having gotten drunk and forgotten the words to songs one too many times. His replacement was Attila Csihar.

The band completed work on Ordo ad Chao (Latin for "Out of Order Comes Chaos"), its fourth album, in early 2007; it was released in North America on April 18, 2007, and to the rest of the world a day earlier. Ordo ad Chao featured a much rawer and more traditional black metal sound than the rest of the band's recent releases; nonetheless, it continued the band's exploration of more progressive songwriting, with "Illuminate Eliminate" being the band's second longest track ever at 9'40". Ordo ad Chao was exceptionally well-received both commercially and critically, and was the band's first album to reach the charts (in Norway and elsewhere).

Blasphemer recently left the group to focus on his other project, Ava Inferi; it is unclear whom his replacement will be.

#2) Mayhem is an electronica producer from the US whose music includes various styles, such as jungle, hardcore, drum 'n' bass, and house.

#3) A hardcore punk Band from UK that released three EPs (7") called "Gentle Murder" in 1982, "Pulling Puppet Strings" in 1983 and "Bloodrush" in 1985. They also figured on various compilations, such as "Riotious Assembly" and the international "Welcome to 1984" with the unreleased song "I Defy"

#5) A Hungarian Venom-like pre-black/thrash metal band who released one demo in 1989.