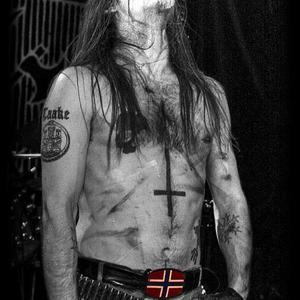 Taake (Norwegian pronunciation: [?to?k?]) is the solo vehicle of one U. Hoest. The band was formed in Norway (Bergen, Hordaland). During 1993, originally billed as Thule, Hoest proceeded to issue a brace of demos in 1993's 'Der Vinterstormene Rast' and 1994's 'Omfarnet Av Svarte Vinger' prior to adopting the new title of Taake. Billed as Taake, Hoest, together with Svartulv and Dim, the group cut the 1995 cassette 'Manndaudsvinter'.

A three track 7" EP, issued by Hoest's own Mosegrodd Productions, arrived the same year with Hoest handling vocals, bass and guitar and Svartulv retained as drummer. Taake's next move was to release the debut album 'Nattestid Ser Porten Vid' through the Wounded Love label. For these recordings session drummer Tundra (a.k.a. Hans Helander) of Frostmoon and Tundra was employed.

A second album, 'Over Bjoergvin Graater Himmerik', witnessed the induction of a brand new band unit comprising of Gigantomachy guitarist C. Corax, Vendigeit bassist / keyboard player Keridwen and drummer Mutt of Gaahlskagg, Trelldom and Sigfader. However, studio time would be interrupted when Corax was imprisoned. The band finalised the recordings upon Corax's release from jail in late December of 2000.

Corax would leave the fold in August of 2001 and Mutt followed suit in January of the following year. Nevertheless, Hoest regrouped for a tour of Germany, Taake now including Hoest on vocals and bass, Keridwen on guitar, Drakkhian of French acts Griffar and Black Dementia on second guitar and drummer T.H. Gjengedal.

In 2004, Taake signed a deal with Dark Essence Records and recorded their third album 'Hordalands Doedskvad' in Grieghallen studios. 'Doedskvad' was released in 2005.

In 2006, Hoest was imprisoned for a period for assault (Hoest's exact words were "I was reported to the police by an individual whose face I so elegantly rearranged due to his unacceptable behaviour") putting Taake's progress on hold. C. Corax has also been imprisoned, but for a longer period.

With Hoest now out of prison, Taake has embarked upon a European tour with Koldbrann and Urgehal.

The fourth full-length Taake album, simply titled Taake, was released in late 2008 after work was completed upon Hoest's release from prison.

An ep svartekunst was also released in early 2008, but was not intended as a preview of the newer full length album.