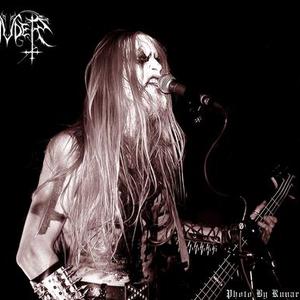 Friction was still evident as Torvus was given his marching orders being supplanted by Desecrator. The band also enlisted American guitarist Diabolus Mort. This line up cut the EP ?Throne Of The Goat' for Solistitium Records.

Blod of GEHENNA sessioned on drums for the debut album ?Kill For Satan'. TSJUDER also drafted ISVIND mainman Arak Draconiis on guitar. Live work saw the addition of drummer Anti Christian although due to injury he would relinquish the drum stool to Jontho Pantera (John Thomas Bratland) of RAGNAROK, SHADOW DANCERS, KHARON and CROWHEAD repute in October of 2001. 2002 would see the recording of a new album 'Demonic Possession'. The 'Throne Of The Goat' EP would also be marked for a re-release in a limited edition run of 666 copies by the Norwegian Mester label.

Guitarist Draugluin teamed up with RAGNAROK on a session basis in late 2002. TSJUDER signed to the French label Season of Mist in April of 2004 in preperation for a third album billed as 'Desert Northern Hell'. An extensive round of European shows in February of 2005 found the band packaged with headliners CARPATHIAN FOREST together with WYKKED WYTCH and E-FORCE. September shows in Europe and Scandinavia had the band forming up a package comprising ARCTURUS, NATTEFROST, RED HARVEST and CONFESSOR. Christian Svendsen joined GRIMFIST in May.


~*~
Bylines by xdemonwitchx
http://www.lastfm.com/xdemonwitchx
In hiatus 2007 On Hiatus Tsjuder's official website http://www.tsjuder.com states that he is on hiatus until further notice. Nagel has commented that Tsjuder is on hiatus engaging in quality time with Family and Freundes.

Tsjuder back from hiatus circa 2011 with New Albem TSJUDER - LEGION HELVETE ~ available in Diamond or Digi packaging via http://www.season-of-mist.com

"A fined-tuned, fathomless-favourite returns to the black metal fold, in, anno 2011, circa 11.2011." TERRORIZER
http://www.terrorizer.com

"The Master Werks of True Norwegian Black Metal in the form ov TSJUDER returns triumphant. And it feels good to take up The Gauntlets again and mosh like a True Black Metal King and reign like a God ov The Rhythmn And Black R&B Music Category of The Heavenly Metal Music Foundation Of The Modern World ~ The Metalle Muzique Empire Of God Dieu ~ men of man not accueli tiens ~ das reich...


Check out Tsjuder at Myspace.com http://www.myspace.com/666Tsjuder666/

Throne of the Goat