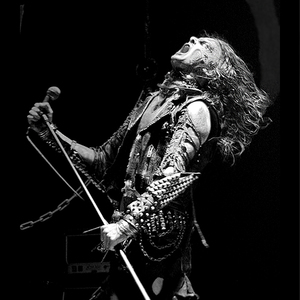 Watain is a Swedish black metal band, formed in Uppsala, Sweden in 1998. The name is taken from a recording by the American black metal group Von. Their first release was the 7" EP "The Essence of Black Purity" on Swedish Grimrune Productions, recorded in Necromorbus Studios 1999. The French black metal label Drakkar Productions offered Watain a deal for two full length albums, and the debut album "Rabid Death's Curse" was released in 2000. After the release, Watain toured and performed alongside bands such as Rotting Christ, Antaeus, Dark Funeral, Malign etc.

In 2003 Watain once again entered the studio, to record their second full-length album "Casus Luciferi". The Stellar Dimension Infernal Tour through Europe wich followed was done together with Secrets of the Moon and Averse Sefira. They also toured through 18 countries with Dissection on their two months long Rebirth of Dissection tour in 2004.

In 2006, members of the band did the Hitler salute and wore t-shirts of the National Socialist black metal (nsbm) band Absurd after their gig on German Party.San Open Air, leading to accusations of being a Nazi band. Asked about this incident in an interview to the German online metal magazine Metal.de, Erik Danielsson (vocals and bass) gave an evasive answer, but when asked about his views on NSBM, he explained the band sees it as a joke:

"NSBM is a joke, a despaired approach of people who're incapable to comprehend the perversion and the insanity of Black Metal. They're trying to appear extreme and limit their selves in their conception to that kind of society, which describes something that we wouldn't care less about. Fuck the world! Black Metal doesn't have anything to do with the world like you know it."

Their third full-length album "Sworn to the Dark" was released in Europe on February 21, 2007, then they toured Europe along with Celtic Frost, Kreator and Legion Of The Damned. In 2008 they played their first headlining tour in North America with Withered and Book of Black Earth. Eclipse Eternal and Kronosfear joined them for some shows as well.

The Agony & Ecstasy Of Watain

Sworn To The Dark