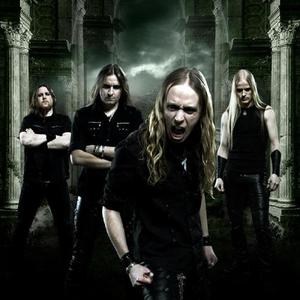 Keep of Kalessin are a Blackened Death Metal band that spawned back in 1994, under the name Ildskjaer, by the hand of Gh&acirc;sh and Obsidian C., later joined by Vyl and Warach. The band's violent yet dark and epic black metal - as well as the somewhat mysterious monicker and lyrics - are inspired by the work of American fantasy writer Ursula K. Le Guin's "The Farthest Shore". With this concept in mind, the guys recorded the first demo "Skygger av sorg" in the Fall of 1996, though several problems in finding a proper rehearsal room made this task rather difficult.

As a matter of fact, the lack of practice resulted in an untight performance on tape and a consequent limited distribution for it. Only ten labels and magazines received it but the response was surprisingly positive, gracing the band with a contract from Italy's Avantgarde Music.

The debut album "Through Times of War" was recorded in Summer 1997 in Brygga Studios, Trondheim, Norway, and presented the band with a crystal-clear yet heavy production on some ear-blasting music which has been often compared to Mayhem's opus "De Mysteriis Dom Sathanas". A couple of years later, after some pretty successful gigs played around Norway together with Bloodthorn, the quartet returned with "Agnen: A Journey Through the Dark", again recorded in the much-appreciated Brygga Studio. With this second album the band actually distanced themselves from the now-trendy norwegian black metal style, picking up influences from the thrash metal and death metal genres, thus establishing a rather more Swedish-oriented sound. But the guys did not forget their roots and therefore they took part in the much anticipated Mayhem tribute album released by Avantgarde Music itself. Their superb interpretation of "Buried By Time and Dust" put them right up there with the likes of Emperor, Gorgoroth and Dark Funeral - just to name a few of the top-class bands that also appeared on this ambitious project.

In the year 2000 the line-up split due to personal reasons, but guitarist and songwriter Obsidian C. wouldn't let that stop him. He continued to make Kalessin-style music and developed his own style even more. This ultra-fast, brutal and yet melodic style needed a drummer, but in the small town of Trondheim he was unable to find one that could keep up with his riffing. Almost three years would pass before he was offered the job in Satyricon after he had auditioned and but some 30 other guitarists from all over the world who had applied for the job. As soon as he was a part of Satyricon he was also in contact with one of black metal's fastest and most brutal drummers, Frost.

Frost heard the new Keep of Kalessin material and immediately said yes when Obsidian C. asked him to do the drumming on his new EP. Touring with Satyricon also made it possible for Obsidian C. to recruit the legendary Attila Csihar who did the vocals on Mayhem's De Mysteriis Dom Sathanas. The three piece line-up recorded the "Reclaim" EP, released in 2004, and put the band into the elite black metal scene of Norway. However, due to the distance between Frost, Attila and Obsidian C., this line-up couldn't last. Obsidian C. was determined to bring Keep of Kalessin to the masses and has seen that live performance is a must for doing that. He teamed up with early Kalessin drummer Vyl and found a perfect replacement for Attila as well as a new bass player. Together with the same lyric writer from the Reclaim EP, Torstein Parelius, Obsidian C. spent the next two years working on the new album entitled "Armada".

"Armada" was released in 2006 to much critical acclaim, garnering Kalessin a slot on Norway's prestigious Trondheim Jazz Festival.

Agnen - A Journey Through The Dark

Agnen: A Journey Through The Dark