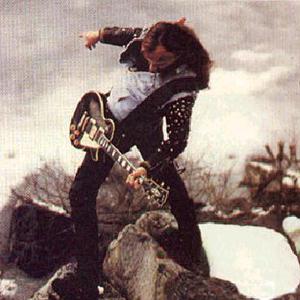 Bathory was the project of Thomas "Ace" B?rje Forsberg (better known as Quorthon, 17th February 1966 - 3rd June 2004). Bathory was a landmark band in the history of black metal. Most second wave black metal bands were influenced by the ground work laid down by Bathory. The name was taken from Erzs?bet (Elizabeth) B?thory, a 17th century Hungarian noblewoman who lived in Csejte (now ?achtice, Slovakia), accused of torturing and killing hundreds of girls and young women. Early years (1980s)

Bathory was formed in Stockholm in 1983. Founder Quorthon, a seventeen-year-old guitarist, was joined by bassist Hanoi and drummer Vans. After various name changes (beginning with Nosferatu, then Natas, Mephisto, Elizabeth Bathory and Countess Bathory) they finally settled on Bathory. Their first recording deal came that same year, when Quorthon managed to secure the consent of Tyfon Grammofon's boss to record two tracks for the compilation Scandinavian Metal Attack. The tracks which they recorded gained unexpected attention by fans. Soon afterward, Tyfon Grammofon contacted Quorthon and asked him to record a full-length album, by which time the original lineup had already split up.

Although Venom's Black Metal, released in 1982, was the first record to coin the term, it was Bathory's early albums, featuring Satanic lyrics, low-fi production and an inhuman vocal style, that defined the genre. Many fans have speculated that Venom was an influence on Bathory; however Quorthon has said in an interview with Kick Ass magazine in 1985 that he only heard of Venom after the first Bathory album was released. He also expressed dislike for many influential and popular heavy metal bands at the time, such as Iron Maiden and Judas Priest. He has also stated that the band's early work was influenced primarily by Black Sabbath, Mot&ouml;rhead and punk.

Bathory's self-titled debut album, and the subsequent releases, The Return...... and Under the Sign of the Black Mark, are now regarded as major influences on the Norwegian bands which extended black metal's musical progression and popularity in the beginning of the 1990s.

The first signs of what was to follow appeared on what many fans consider to be Bathory's best album, Blood Fire Death, on which some of the tracks the pace had slowed down to allow for a more epic songwriting approach, said to be an influence on, or initiation of, the extreme metal sub-genre viking metal. It was also here that the Viking theme was introduced. However, most of the musical elements of black metal were still present.

It was with the release of Hammerheart that Bathory surprised many of its fans. The style had now drastically changed towards less aggressive, more epic and atmospheric music; the lyrics dealt with themes about Vikings and Norse mythology. Partially influenced by the American power metal band Manowar, who were the most famous heavy metal band to incorporate elements of Epic Mythology in their music, Bathory had shifted away from their Satanic Metal roots, to become pioneers in yet another genre within the world of extreme music - that of viking metal. The style of Hammerheart was further demonstrated on the subsequent Twilight of the Gods and Blood on Ice.

With Requiem, released in 1994, Bathory changed style once more, this time turning to retro-thrash in the vein of 1980s Bay area thrash bands. In recent years, many critics have seen Bathory's output as increasingly erratic, as the band has returned again to Viking themes and, with the Nordland albums of 2002 and 2003, largely abandoned the retro-thrash sound of the mid-1990s in favour his more popular, more epic style for which he is best known.

Bathory have been cited as an influence by musicians as diverse as Metallica, Opeth, Marilyn Manson, Cradle of Filth, Billy Corgan of The Smashing Pumpkins, Eric and Brian Hoffman of Deicide, Darkthrone and Beherit, just to name a few. An early member of the band was Jonas ?kerlund, the music video and film director.

In June 2004, Quorthon was found dead in his home, apparently due to heart failure. He was known to suffer from heart problems in the past.

On June 3, 2006, Black Mark Records released a box set in tribute to Quorthon containing three CDs of his favorite Bathory and Quorthon songs, a 176 page booklet, a DVD with his long-form video for One Rode to Asa Bay, an interview and some rare promo footage, and a poster.

Several Bathory tribute albums have been compiled by black metal artists, one of which was entitled In Conspiracy With Satan: A Tribute to Bathory .