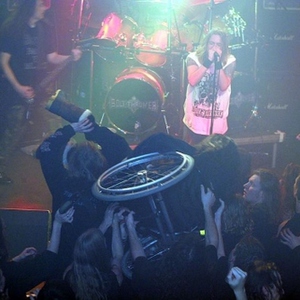 One of the world's most consistent and enduring death metal bands, Coventry's Bolt Thrower has weathered the best and worst of times in the genre's history without giving in to commercial temptations or altering its sound. The fact that they were unusually blessed with a steady lineup throughout much of their career contributed to this stability, and though they were rarely bestowed much praise for their efforts, Bolt Thrower gradually established itself as one of the best death metal bands ever to emerge from England, and the earth for that matter.

Taking their name from a weapon in one of their favorite tabletop miniatures games, Warhammer Fantasy Battle, they drafted vocalist Alan West, guitarist Barry Thompson, and bassist Jo Bench (one of the first female musicians to take part in an extreme metal group of any sort) to complete the lineup. True to their name, Bolt Thrower dedicated their career to analyzing and dissecting all aspects of human warfare - its history, weapons, etc. - and took to the road to perfect a brutalizing musical onslaught worthy of such subject matter.

Despite the material's general inaccessibility, legendary BBC Radio1 DJ John Peel became an early supporter, hosting the group for various early sessions (subsequently released in 1991 with the expected Peel Sessions title), bolstering their profile on the way to securing a deal with the Vinyl Solutions label. Around this time, West was replaced by the band's van driver, one Karl Willetts, who proved himself a more than capable successor and served as the final cog in the Bolt Thrower warmachine. Released in 1988 with little success, their poorly produced and somewhat tentative debut album, In Battle There Is No Law, lacked the focused ferocity yet to come, but delved into their lyrical obsession with all things warlike.

The following year, Bolt Thrower became one of the first acts to sign with on-the-rise, extreme metal powerhouse, Earache Records (also the home of grindcore experts Napalm Death) and 1989's Realm of Chaos fittingly saw them partner with Games Workshop, the company responsible for the Warhammer game which had inspired their name. Boasting lyrics directly inspired by the game and custom artwork provided by GWS, Realm of Chaos was a far more confident effort, and despite continued production problems, Bolt Thrower found its identity.

The band then joined the now-infamous Grindcrusher tour (also featuring Napalm Death, Carcass, and Morbid Angel) across the U.K. before starting work on what would become their most definitive album, 1991's War Master. This time, producer Colin Richardson helped the band achieve the taut, precision-filled intensity they'd been looking for all along, and the LP has since come to represent Bolt Thrower's signature sound: Willetts' deeply guttural growl combined with Ward and Thompson's dense, nearly impenetrable, wall of guitar riffs set to the requisite double kick drums (interestingly, Bolt Thrower rarely resorts to all-out speed, maintaining a measured, pounding pace).

Their sonic paradigm now in place, Bolt Thrower kept themselves busy for the next few years, touring across the U.K. and Europe with the likes of Unleashed and Cemetary, while recording strong follow-ups like 1992's The IVth Crusade and 1994's For Victory, each of which achieved slightly superior results and maintained the group's gradual shift to slower, doomier styles.

Bolt Thrower's longtime stability was coming to an end however, as vocalist Willetts and drummer Whale threw in their lot around this time, wishing to get off the road and pursue a more normal lifestyle. For their part, the remaining bandmembers were becoming increasingly protective of their art and, convinced they weren't getting the best promotional support, parted ways with Earache and signed to Metal Blade. Replacement musicians came and went as the group prepared new material, and repeated delays over artwork postponed the release of their sixth, official album.

By the time 1998's Mercenary finally arrived, original singer Willetts had been persuaded to return long enough to record his parts and new drummer Alex Thomas was sitting on the hot-stool. By then, most fans had given Bolt Thrower up for dead. Perhaps reflecting the turmoil within, the record was hardly one of their better outings and was overshadowed by former label, Earache's, Who Dares Wins collection of the same year.

In 2004, Dave Ingram left the band due to health concerns. Karl Willets came right back into the song-writing process, followed by a summer recording session, resulting in the November 2005 release of the album Those Once Loyal. An enormous success, the album put the band back on the map.
As of 12th of June, 2008 Bolt Thrower announced that their next album has been postponed indefinitely, this does not mean that they are splitting up however.

Realm Of Chaos (Slaves To Darkness)