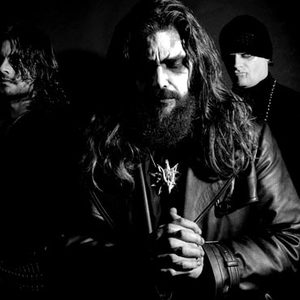 Celtic Frost was an influential metal band from Zurich, Switzerland. They are known for their heavy influence on the extreme metal and gothic metal genres. The group was first active from 1984 to 1993, and re-formed in 2001. Following Tom Gabriel Fischer's departure in 2008, Celtic Frost decided to break up again. Celtic Frost's frontman, guitarist and singer Tom Gabriel Fischer, adopted the alias Tom Warrior.

Celtic Frost's frontman, guitarist and singer Tom Gabriel Fischer, adopted the alias Tom Warrior. With Steve Warrior on bass, he formed one of the earliest extreme metal bands, Hellhammer, in 1982. Steve Warrior was later replaced by Martin Eric Ain - also a pseudonym. The band attracted a small international fan-base, got signed to Noise Records in Germany and recorded their debut EP "Apocalyptic Raids" in March 1984, now a rare finding on e-Bay or second hand record stores around the world.

By May 1984, Hellhammer had disbanded. Fischer and Ain, along with session drummer Stephen Priestly, regrouped as Celtic Frost. Their 1984 debut LP, Morbid Tales was a hit on the underground metal scene, and the band set out on its first tour, through Germany and Austria. This was followed with an EP ?Emperor's Return?. Both early releases are now available on one CD. One of their more influential recordings was 1985's "To Mega Therion", followed in 1987 by "Into the Pandemonium". These albums were some of the pivotal LPs for underground metal and inducted a new and more varied sound. Celtic Frost, along with Venom and Bathory were pioneers in the still underground black metal scene, although Celtic Frost were much more experimental with the addition of classical instruments, opera vocals and sampling. They were given the new title of avant-garde metal.

After a subsequent North American tour (which saw the addition of a second guitarist, Ron Marks to the groups ranks), financial trouble, personal tension between the band members and an ill-fated relationship with their record label led to a complete dissolution of the band. Six months later, Warrior decided to reform the band with Stephen Priestly back on drums, Oliver Amberg on guitars and Curt Victor Bryant on bass. The resulting album "Cold Lake" was a disappointment to most of the group's established fan-base but achieved notable success in the North American market. Bryant fired Amberg and former live guitarist Ron Marks returned as a guest for the recording of "Vanity / Nemesis" in 1990. The most significant change, however, was the return of early bassist Martin Eric Ain. But Celtic Frost's reputation did not fully recover. The group's next (and, as it would turn out, last for several years) album was a collection of rare and unreleased recordings called "Parched With Thirst Am I and Dying" in 1992. The compilation's title was inspired by an old Roman prayer. It featured unreleased material, re-recorded versions of older songs and some studio session versions, closing the chapter on one of the most important underground and experimental bands of all time.

A final album titled ?Under Apollyon's Sun? never eventuated under that title, although Fischer co-founded a new group called Apollyon Sun. Celtic Frost were disbanded in 1993.

In late 2001, Fischer and Ain began to write music together again, along with Unala on guitar and, from late 2002, experienced Swiss drummer Franco Sesa (also known within the group as the Inverted Cross). The aim was to develop and record a new, very dark and heavy album. The completion of the project took far longer than anticipated (in part due to the DIY nature of the project and the project's financing) but finally resulted, in late 2005, in what Fischer and Ain describe as ?perhaps the darkest album Celtic Frost have ever recorded?, based on a combination of the musical aura of "To Mega Therion" and "Into the Pandemonium".

On May 29, 2006, Celtic Frost embarked on the most extensive tour of the band's career, the ?Monotheist Tour?, initially headlining festivals (e.g. the Wacken Open Air festival, in front of an audience of 50,000) across Europe the United States and Canada in 2006, and the group's first ever shows in Japan in January 2007. In early 2007 the European leg of the tour took place and a return to the United States as a special guest to Type O Negative. Further festival appearances and concerts followed in mid-2007.

Fischer tendered his resignation from Celtic Frost on April 9th, 2008, with this message displayed on the band's official website:

?Celtic Frost singer and guitarist Tom Gabriel Fischer has left Celtic Frost due to the irresolvable, severe erosion of the personal basis so urgently required to collaborate within a band so unique, volatile, and ambitious.?

Bassist Ain stated that the band ?is still alive, albeit in a coma of sorts.? He went on further to say that the remainder of the band is ?not going to continue recording or touring,? saying this ?would be preposterous? without Fischer. Fischer has himself gone on to form a new band called Triptykon, featuring Celtic Frost touring guitarist V Santura, original Celtic Frost drummer Reed St. Mark, as well as bassist Vanja Slay. Fischer has also said that his new band will sound similar to the direction Celtic Frost took on their 2006 album, "Monotheist".

The Best Of Celtic Frost: Are You Morbid?

Parched With Thirst Am I And Dying