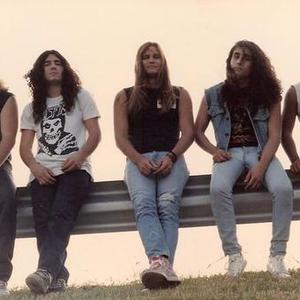 There are multiple artists with this name: 1) Devastation was originally started as a 3-piece band with Christian Sia, Dick, and James Munroe. The band has been through many internal conflicts resulting in line-up changes thus bringing in Joey Sia and Maui Olivares. After a series of shows with the 4-piece band Devastation decided to bring back their original guitarist James Munroe now making the band a 5-piece.

1) Devastation was originally started as a 3-piece band with Christian Sia, Dick, and James Munroe. The band has been through many internal conflicts resulting in line-up changes thus bringing in Joey Sia and Maui Olivares. After a series of shows with the 4-piece band Devastation decided to bring back their original guitarist James Munroe now making the band a 5-piece. In April of 2012 Maui had to leave the band shortly due to personal reasons and we brought in good friend and vocalist DD to front-line the band. In June of 2012 DD had to move to Colorado, leaving the band, and Maui returned to the 5-piece punk band in June of 2012. We're a five-piece "Raw Hardcore Punk" band straight out of the I.E. based in Murrieta, California. Our genre of music varies from Hardcore, Thrash, Crossover, Street, Crust, and many possible genres - we may not have a solid genre to play but our roots come from hardcore punk rock. Our full-length album "Rebel Streets" is out now and you can purchase it at one of our shows or at Spindles Records @ Temecula, CA.

2) Devastation is a black/war metal band from Vancouver, BC CANADA.

3) Devastation is a Thrash metal band formed in 1986 in Corpus Christi, TX, USA. Their first show was opening for Anthrax in Texas that same year. Despite growing popularity, the band came into hard times due to lackluster label support in the 90's and broke up after the tour for their third album "Idolatry." "Violent Termination" is thrash with an almost Venom-like musical quality. Unlike the band's follow-up releases, however, this one isn't quite a manic. That is not to say it's not good or that it's not heavy, because it is. There is just a different feel to this one than either of the band's follow-up albums. Whereas those two albums border an a death metal sound, this one is delivered with a punk aggression and is certainly influenced by bands like Venom, early Slayer and even a bit of classic metal like Anvil and Priest. Personally I really dig the true metal roots peaking through on this CD.Heavy as a 100 ton wrecking ball coming full force through a brick wall "Signs of Life" is full throttle, testosterone ingested, adrenaline rushing, heavy metal that straddles as fine line between death metal and thrash metal. Devastation don't let up on the speed or intensity for one second. The production is raw and heavy and only adds to the the overall appeal. As with "Idolatry", this album was out of print for a long time and highly sought after by collectors. Fortunately in 1998 Century Media rereleased almost the entire Combat catalogue. The re-release contains an expanded, full color booklet with photos, lyrics, a short bio, and a small letter from bassist Edward Vasquez.Idolatry is one of the heaviest thrash metal album ever written, ranking up with the toughest of thrash monsters; Possessed, Dark Angel, Death, etc. As with those bands, Devastation were one the borderline of death metal, but never actually crossing over into blast beats or growling vocals. The guitars on this CD are vicious, being produced by legendary metal factory Morrisound Studios. Unlike the bands that Devastation were compared to, these guys lyrics were very anti-Satan. I am not even suggesting that they were a Christian band, but only that they seem to take an opposite stance that bands like Slayer and Dark Angel were taking in the late 80's. Check out the lyrics from "Souls of Sacrifice" below. In 1998 Century Media reissued and remastered this CD with additional liner notes and several live bonus tracks.

5) DevastatioN is a typical Trash Metal band from Kaprijke, Belgium.

6) Devastation is a thrash band from Chicago, Illinois.