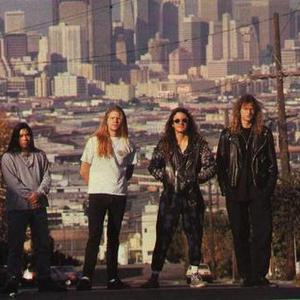 Formed in 1983, San Francisco's Mordred was one of the first bands associated with the fusion style called funk metal. Originating in the bay area thrash metal scene, Mordred included vocalist Scott Holderby, guitarists Danny White and J. Taffer, bassist Art Liboon, and drummer Gannon Hall. With a precise style of riffing in the style of Bay Area stars such as Testament and Forbidden, the band distinguished themselves thanks to Liboon's uncommonly upfront bass work and a tentative flirtation with funk - a style which had more in common with funk-rock bands like Faith No More.

In fact, their 1989 debut, Fools Game, contained a cover of Rick James' funk classic "Superfreak," featuring scratches courtesy of DJ Aaron (Pause) Vaughn. After replacing Taffer with guitarist James Sanguinetti and making Vaughn a full-time member, the band decided to embrace their funk interests for their next, and perhaps best work, 1991's In This Life. They would record three more EPs and one final full length before disbanding in 1994.

As of 2008 the band has reformed and is planning to record a new demo.