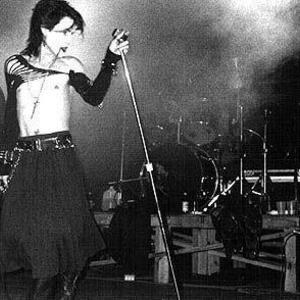 Christian Death are deathrock band which formed in Los Angeles, California, United States in 1979. Originally fronted by Rozz Williams (real name Roger Alan Painter) who had previously been a member of the bands The Upsetters, The Asexuals, Daucus Karota and briefly Premature Ejaculation. The names of some of these acts would be resurrected by Rozz many years after leaving Christian Death. The band's name was a corruption of then massively popular fashion designer Christian Dior's name. This line-up of the band released their only album, Only Theatre of Pain, in 1982.

The band's name was a corruption of then massively popular fashion designer Christian Dior's name. This line-up of the band released their only album, Only Theatre of Pain, in 1982. A dark, sinister style of punk rock. The album gained local success. A year later the band completely broke up.

Singer Rozz then teamed up with members from the band Pompeii 99 founded by singer, guitarist, song writer Valor Kand. Rozz took over vocals leaving Valor to focus on guitar. Pompeii 99 had released one album, Look At Yourself, to much acclaim; it, too, can be said to have an apocalyptic theme with a punk rock flavor though some songs, such as "Love Me For My Mind" are far more pop in nature. Pompeii 99 had been planning their first tour when it was proposed by their French record company to merge Pompeii 99 into a new version of Christian Death which, after some debate, was agreed upon. Thus, began the new line-up of Christian Death and the first Pompeii 99 tour became the first Christian Death tour.

Part way through the tour the band stopped in Wales to record songs, some of which were originally intended for the next Pompeii 99 album, the fusion of which led to the unique sound of the classic Catastrophe Ballet. Like the first Pompeii 99 album, Catastrophe Ballet had an apocalyptic theme, however the music morphed into something not quite Pompeii 99 and nothing like the first Christian Death album; more melancholy than the former and more bittersweet than the latter. After the tour the band returned to LA to later record the 3rd Christian Death album, Ashes, an album which borrowed much of its styling from UK contemporaries Sex Gang Children and from French cabaret music.

After confirming the second tour in 1985 singer Rozz quit the band. Valor returned to vocals and agreed to rename the group Sin And Sacrifice. The band embarked on the second tour under the name Christian Death much to Rozz's displeasure causing a rift between the two and resulting in a large number of fans holding a grudge against Valor that curiously doesn't extend to Gitane, David Glass or Barry Galvin. In Italy the band recorded the EP, The Wind Kissed Pictures. Almost immediately work began on the fourth full length album, Atrocities, inspired by the atrocities of World War II and the connection to future shock waves. While continuously touring in 1987 the band released their fifth album, The Scriptures, the theme of which explored world religion and how the legacy of these beliefs impact our world today.

1988 brought us the release of Sex & Drugs & Jesus Christ. This was a turning point for the band. The cover depicted an image of Jesus shooting up heroin. This was a full-frontal attack by Valor against the Church with a scathing heretical mockery of organized Christianity. The band then found themselves confronted by protesters, riots, and bomb threats. These events and the band;s imagery and fashion, in addition to the theatrical performances from their debut album, went on to influence the likes of Nine Inch Nails, Korn, Marilyn Manson,, Type O Negative, and many others. 1989 also saw the departure of Gitane Demone; her relationship with Valor having ended (with two children, one being Sevan Kand, whose crying was sampled on the title track to Ashes and who sang lead on the later song "I Hate You"), and citing artistic differences and her continued friendship with Rozz as her primary reasons for leaving. She played her final gig with the band at London's Marquee on June 10th 1989. This show was released as the live album The Heretics Alive

1989 saw the release of the double-album epic All the love, all the hate, interpreting the juxtaposition between life and death, day and night, man and woman, black and white.

In 1991 came the release of Insanus, Ultio, Proditio, Misericordiaque, with its theme of an ancient dream state.

Late in 1991, after focusing primarily on his noise/performance art act, Premature Ejaculation and the deathrock/hardcore punk band Shadow Project (co-fronted with his then-girlfriend, and briefly wife, Eva O), and seven years after quitting Christian Death, Rozz Williams performed a concert in Los Angeles under the name Christian Death with other former members Rikk Agnew (guitarist) and George Bellanger. On the same day Christian Death was in Europe performing in Paris, France. Assuming this was a one time effort to earn extra cash, Valor ignored the incident and carried on recording and touring, only to later learn that a live album of the show, ...invocation, had been released using the name Christian Death. This was followed by a studio album called The Iron Mask (an album predominantly of re-recordings of songs from Only Theatre of Pain), a reference to the Alexandre Dumas novel about a usurper who imprisons the rightful heir to the throne; The Iron Mask featured yet another line-up supporting Rozz Williams on vocals that included Eva O on guitar and backing vocals, and bassist William Faith (who later formed Faith and the Muse with then-girlfriend, now-wife, Monica Richards, of Washington DC-area gothic rock band Strange Boutique). This led to a turf-war between the two bands for the right to use the name, during which time, Valor managed to trademark the name and Cleopatra Records would release the next two studio albums, The Path of Sorrows and The Rage of Angels, as "Christian Death featuring Rozz Williams" to avoid legal conflict; depending on who you ask amongst Williams' friends, these two albums were originally intended as Shadow Project albums.

By 1994, female vocalist and bass guitarist Maitri, (the now 2nd most continuous member of Christian Death) joined the band to record Sexy Death God which proclaimed sexual freedom in the face of religious adversity. This was followed up by Prophecies, in 1996.

Sadly in 1998, Rozz Williams committed suicide. It is believed a combination of his battles with heroin addiction, a cataclysmic love-life, and general failing health played a role, as no "proper" form of suicide note was found by the body. In that same year, Christian Death released Pornographic Messiah.

In 1999 Christian Death released ?Born Again anti Christian? which featured members of Cradle of Filth and a song sung by Dani Filth. The album theme was an assault on Born-Again Christians as well as having the first songs inspired by mass murderers. In 2000, the band promoted the album on tour with Cradle Of Filth.
While on tour with Cradle Of Filth, former Cradle of Filth Drummer Will Was Sargenson played in Christian Death.

In 2002, Maitri released her debut album and band Lover Of Sin with songs and production collaboration by Valor. Later that year Cradle Of Filth guitarist Gian Peres joined Christian Death for the 2003 tour. Lover Of Sin was the support, with Tony Norman of Morbid Angel on guitar, Howard Davis of Evans Blue on drums and Juan Punchy Gonzalez on guitar.

In 2007/8, Christian Death released their 13th studio album ?American Inquisition?, on the strength of its success, the band did four European tours and one USA tour, all in 2008.

The Root Of All Evilution