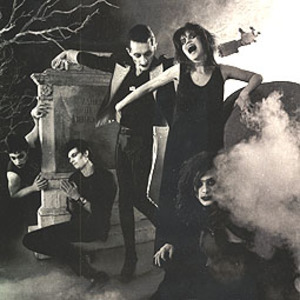 45 Grave was a punk rock band formed in 1979 in Los Angeles, California. The original lineup consisted of Dinah Cancer on vocals, Paul Cutler on guitar, Rob Ritter (also known as Rob Graves) on bass, and Don Bolles of The Germs on drums. The band evolved out of a proto-industrial music band called Vox Pop, who recorded two singles and played around the Los Angeles area, including an opening slot for the final performance of Throbbing Gristle in Culver City. Vox Pop contained all of the members of 45 Grave as well as others such as Jeff Dahl.

Vox Pop continued to coexist with 45 Grave until early 1981.

They created their own hybrid subgenre of horror punk and gothic rock which would later come to be known as "deathrock."

In 2004, to commemorate its 25th anniversary, 45 Grave reformed with an all new lineup, Dinah Cancer being the single remaining member from any previous incarnations. The band, however, has the blessing of the ex-members. Dinah Cancer posted on her MySpace blog, "I'm building this to keep the spirit of 45 Grave alive, introduce its magic to new fans, and as a personal commemorative of my best memories being the driving force and front person of 45 Grave. This is a part of my life that indeed changed me forever."